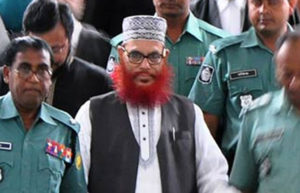 Recently, the leader of Bangladesh’s largest Islamist party, Jamaat-e-Islami, Motiur Rahman Nizami was sentenced to hang by the neck until death. He was sentenced by a special tribunal that hears unresolved cases connected to the war of liberation that technically ended on December 3, 1971. This has caused much controversy. Many have feared a new round of bloodshed in response. The Islamists will use the ruling in an attempt to rally their forces in support of dark-age barbarism. The Awami League will use any chaos to further increase their dictatorship. The empire will support both jackals against the people. A land that is wounded is more easily controlled.

Our land continues to bleed

It is important to understand our history in order to know our present. Prior to liberation, Bangladesh existed as an internal colony of Pakistan, which was also a kind of semi-colony of the Western imperialists. Thus Bangladesh was a colony or a colony so to speak. The capitalists and landlords who had the power and wealth were concentrated in Pakistan. They maintained their brutal exploitation through terror, often enforced by the most backward, feudal segments of the population. Often Islamic organizations were enlisted to terrorize the masses. Our struggle for independence came at a great price.  It is hard to know the exact number of people who died in the genocidal conflict. According to some estimates, up to three million died from indiscriminate killings. Students, activists, ordinary workers and peasants were rounded up and murdered in an attempt to break the will of the masses. At the behest of Pakistan, the Al-Shams and Al-Badr forces  attempted to wipe out the intelligencia, to erase the best minds of our country. Just days before their surrender, the Pakistan Army and Razakar militia picked up engineers, physicians, professors, and writers in Dhaka, leaving over a hundred bodies in a mass grave. Many mass graves dot the landscape even today, leftovers from the war. Hundreds of thousands of our mothers, sisters, and daughters were raped as part of Pakistan’s pacification efforts. Another ten million people are estimated to have fled from their homeland as refugees. Many more died as a result of purposeful sabotaging of relief efforts during the 1970 cyclone by Pakistan and the West. Many more died as a result of the economic disruptions of the war. Journalists and writers were murdered systematically in order to hide the brutality from the world. Yahya Khan, president of Pakistan, declared, “Kill three million of them, and the rest will eat out of our hand.” Both the West and China supported the brutal attacks on the people. Recent declassified documents reveal that the United States’ State Department referred to the movement to crush Bangladesh as a “selective genocide” in its internal discussions. Henry Kissinger, who was meeting with Mao at the time, compared the Bangladeshi leadership to another thorn in his side, Salvador Allende of Chile. Later, Allende would be brutally ousted by US-backed forces. In both cases, China lent its moral support to the Western imperialists and their allies. China was one of the first states to recognize the Pinochet regime. China also vetoed Bangladesh’s application to the United Nations on January 25, 1972. Sadly, Mao began pushing China rightward, against his own revolution. China’s alignment with imperialism occurred after the September 1971 fall of Lin Biao, who had been the main representative of the strategy of supporting wars of liberation. It was Lin Biao said:

Everything is divisible. And so is this colossus of U.S. imperialism. It can be split up and defeated. The peoples of Asia, Africa and Latin America and other regions can destroy it piece by piece, some striking at its head and others at its feet. That is why the greatest fear of U.S. imperialism is that people’s wars will be launched in different parts of the world, and particularly in Asia, Africa and Latin America, and why it regards people’s war as a mortal danger.”

“In the final analysis, the whole cause of world revolution hinges on the revolutionary struggles of the Asian, African and Latin American peoples who make up the overwhelming majority of the world’s population.”

Unfortunately, after Lin Biao fell, China moved rightward, abandoning the revolutionary road domestically and internationally throughout the 1970s. Even though Mao had been a great revolution, he began to make big mistakes. Much of the world watched as our land bled. And our wounds are still open today. Just as many of the big imperialists that supported the killing of our people go free, just as many with blood on their hands in Pakistan continue to walk the streets,  so too do many of their collaborators, their running dogs in Bangladesh go free. Some of the biggest traitors who terrorized our people then continue to terrorize our people now. Just as the Islamists worked to enslave our people then, they continue to do so today.

Ever since it was established, the tribunal has not represented the people, but rather the political winds. It is not a tool of real justice, but a tool by which one jackal bites another. On the one side, there is the Awami League, which has long since sold out its original principles. First it sold out to the Indians and Soviets, now it sells out to India and the West. First it sold our people to the Indian and Soviet bureaucrats, now it sells us to the neo-liberal capitalists of India and the West. They work with the semi-feudal landlords On the other side, there is Jamaat-e-Islami and other Islamists, who would also enslave our people to the capitalists, semi-feudal landlords, and mullahs of Pakistan. These are the same hypocrite mullahs who say “death to the West!,” as they take money from empire, especially through the Gulf Arab states and CIA. These are the mullahs who enslave our sisters and daughters like cattle. These are the mullahs who beat their own families into submission. These are the “moral” God men who threaten people with beheadings and rape in this world and threaten eternal torment in the next. They would like to see us all return to dark-age barbarism in order to weaken our country so it is more easily stolen from our children by the empire. The Awami League uses the trials as a way to shift attention away from its own corruption and betrayals, to shift attention onto the crimes of the Islamists. Jamaat-e-Islami uses the tribunal to play the victim, to shift attention onto the Awami League.

There will be no healing of old wounds until there is real justice.  The law of empire will not stop the imperialist. The law of capitalism will not stop the capitalist. The law of medievalism will not stop feudalist. The system will never fundamentally hold itself accountable. All those who have committed crimes against the masses must answer, but they must answer before the masses. All the running dogs, all the jackals of empire and barbarism, must face the people. The Islamists are guilty. The Awami League is guilty. The entire system is guilty. The Old Power has no solutions, it is a rotten to the core. It must be swept away. They must all answer for their crimes.

We see through the lies of the system. Real justice is within ourselves.  There is no greater warrior than the worker, the farmer, the intellectual who fights for people, for the land, for our future. There is no greater weapon that the sword of truth, revolutionary science, Leading Light Communism.  We all have a duty to build a better world, a New Power of the Leading Light. We fight for our children, their children, for our brothers and sisters, for our mothers and fathers. We fight for each other. Our future is our own.

On the protests in Bangladesh: What is to be done?