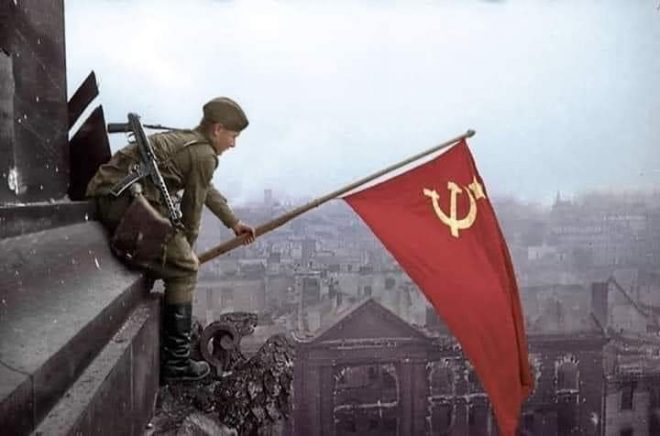 This year marks the 75th anniversary of Victory Day, the end of the Great Patriotic War which was on May 9, 1945. It was the day when Germany officially surrendered. The event took place nine days after the Red Army victory at the Battle of Berlin (April 30, 1945), where Soviet troops famously raised the Red Flag over the Reichstag. We remember the immense sacrifices that the Soviet Union, the true force of liberation, made in defeating fascism during the Great Patriotic War. The USSR’s losses are estimated to be around 26.6 million, making up half of all the casualties of World War II.

For many years, U.S. imperialism has been trying to diminish and erase the Soviet Union’s achievements, attempting to rewrite history and greatly exaggerating the role that the United States played in order to boast about its supposed heroism — despite the fact that it was a latecomer to the war. Not only was the U.S. a latecomer, but American corporations made business deals with the Nazis prior to (and in some cases, during) the U.S. joining the Allies in combat. The fact that it was the Soviet Union that defeated the Nazis threatens the myth of America as a liberating force — a myth that is needed to justify U.S. imperialism; hence the reason for the U.S. lionizing and exaggerating its role in WWII.

Nonetheless, this is both a tragic and glorious day of remembrance. Socialism achieved a decisive victory over fascism, and it will achieve one over imperialism. No amount of U.S. historical revisionism can erase that. We salute this milestone!