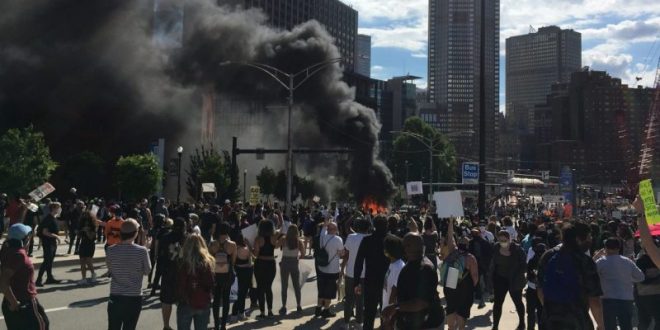 On the Uprisings in the United States

This week there have been large-scale protests, riots, and looting across the US in response to a video depicting the murder of George Floyd, a black man, by a white police officer. While racist police violence in the US is not a new phenomenon, this particular incident was publicized shortly after two other high-profile reports of racially motivated killings of black citizens, and on top of an unprecedented unemployment crisis caused by the US response to the global pandemic.

At the time of this writing, many major cities within the US have enacted curfews and responded with draconian repression methods against the various uprisings manifesting across the country. Alarmingly, the National Guard has been activated in some areas to enforce these measures. Even more concerning is US President Trump’s order to activate federal military troops to suppress the uprisings. The brutality that the US routinely exports to the Third World might now be coming home to roost. The highly authoritarian state response to this nationwide political upheaval, combined with the current economic collapse and the general decaying state of capitalism, necessitates the grave consideration that the US is possibly sliding towards fascism.

At this time, the current protests cannot be considered revolutionary in nature. We must stress that without disciplined and organized leadership based in revolutionary science with the express goal of overthrowing the capitalist system, these uprisings will at best result in meaningless reforms, and at worst will provide a pretext for increased state repression against the poor and working class. Without a real revolutionary movement, the capitalist system that the police protect will remain intact, and the US will continue its legacy of brutality at home and abroad. That does not mean that these current protests by the people are not justified, as they are righteous and should be applauded. However, in order to be effective, the people must adopt a revolutionary mindset and take the necessary steps to overthrow the system which oppresses them. There can be no lasting justice as long as capitalism remains the dominant global system.

While the rage expressed by the people of the US does not currently amount to revolution, it is still important to mount resistance within the belly of the Empire. Although revolution is more likely to happen first in the Third World countries where people face extreme poverty and deprivation, it is important nonetheless to engage in revolutionary organizing in the First World in order to provide meaningful resistance to the capitalist system while building international solidarity and organization among working-class people everywhere. The struggle against capitalism is global and includes people from all countries, even from within the heart of the Empire, the United States. As capitalism continues to decay, a wave of revolution will sweep across the Earth, eventually liberating the First World and Third World alike.

It is in times like these that revolutionary leaders and individuals are created. They are called to action out of love for the people, their leadership forged through struggle. Those who look beyond narrow reformism to embrace revolutionary ideals and methods will be the next generation to carry out the struggle for a peaceful, just world, a communist world. It will be a difficult struggle to accomplish such an incredible task. However, victory can be achieved by the people united and armed with revolutionary science, proletarian internationalist organization, strong personal discipline, and integrity.

We offer our solidarity to those struggling against police terror in the United States. The Leading Light Communist Organization condemns all police violence directed towards the poor and working class, and stands with the people in resisting the terrorism of the US empire. The capitalist system is doomed. The time is now for the working class to organize for the complete revolutionary transformation of society.

Global revolution is the only solution!

Long live the people, united in struggle! Victory will be ours!