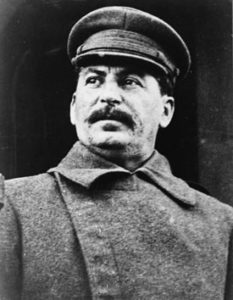 Many revolutionaries still stumble on the question of Stalin. They just can’t get by the Stalin issue, even though Stalin is still revered in much of the world despite the best efforts of the bourgeoisie to tarnish him. Stalin is a controversial figure, even within our own movement. Yet we say that he was still more right than wrong. Mao said that Stalin was 70 percent good, 30 percent bad. Perhaps Mao’s number is too positive, perhaps too negative. Mao made many errors too. Regardless, the thing we always have to remember about Stalin is that he faced problems which are unimaginable for most First World peoples.

From day one, the Soviet Union was encircled by the imperialists. There we inherited a country that was ravaged by violence and poverty. There the first breakthrough was made. There we built sustained socialism for the first time. Only a few decades after socialism was born, we were hit by the catastrophe of another world war. Twenty six million or so Soviet people died in World War 2. Had Stalin not industrialized as he did, with all the sacrifice that required, Hitler may  have been able to roll on to the Pacific ocean exterminating everything in his path. Or the conflict would have been more long and drawn out. More lives would have been lost. One of the most important lessons of Stalin that we must learn is that we revolutionaries will have to face problems for which there is no perfect solution. Sometimes the world presents us with hard choices. Stalin represents the hard choice.

Like most things, there is another side to Stalin than the one portrayed in the reactionary media. Many of the finest revolutionaries of the last century spoke well of him. Black communist W. E. B. Du Bois said of him:

“Stalin was not a man of conventional learning; he was much more than that: he was a man who thought deeply, read understandingly and listened to wisdom, no matter whence it came. He was attacked and slandered as few men of power have been; yet he seldom lost his courtesy or balance; nor did he let attack drive him from his convictions nor induce him to surrender positions which he knew were correct. As one of the despised minorities of man, he first set Russia on the road to conquer race prejudice and make one nation out of its 140 groups without destroying their individuality.”

“His judgment of men was profound. He early saw through the flamboyance and exhibitionism of Trotsky, who fooled the world, and especially America. The whole ill-bred and insulting attitude of Liberals in the U.S. today began with our naive acceptance of Trotsky’s magnificent lying propaganda, which he carried around the world. Against it, Stalin stood like a rock and moved neither right nor left, as he continued to advance toward a real socialism instead of the sham Trotsky offered.” (1)

When looking at history, we have to take a sophisticated view. Things are rarely simple when it comes to revolution. Was the Stalin era a harsh one? No one should deny that. But, as Mao said, revolution is not a dinner party. When we take power again, we too will be faced with hard decisions. Enemies will try to destroy us, just as they always have. We will, at times, need to deal with them harshly. This has been shown again and again. Enemies do not simply go away because we wish them to. The enemy will try to drown us in blood. We are not foolish utopians.

One thing about Stalin’s approach that we should try to avoid, which was also common during the  Mao era too, is looking at the problem of counter-revolution through the police paradigm. Now, the Chinese revolutionaries did reject the police approach on the level of theory, but the reality is that they did not always reject it fully in practice.  Usually their practice was muddled. A quick look at material from the period reveals that all of those leaders denounced in the period, both communist and capitalist, were seen through the police paradigm. They were seen as spies, wreckers, agents on the payroll of foreign states. The verdicts against them were police verdicts. Counter-revolution was seen through the lenses of the police. This is the wrong approach.

Of course there are real spies. Of course there is real wrecking. We are not fools. In fact, there are probably more FBI and CIA agents in the US than activists organized in self-described “socialist” organizations; there are probably more Hare Krishnas too — a sad indicator  of the lack of revolutionary social base in the First World.  While there are genuine cases of infiltration by spies and wrecking, such infiltration is not the main reason for counter-revolution. Maoists in China began to see the problem structurally, even if they were not always consistent. They saw that the continuation of inequalities and the continuation of  backwards ideas will solidify, congeal and spread if not continually attacked. Those structural and ideological problems will result in a new capitalist class arising within the organs of power, within the Communist Party and state. The problem of counter-revolution, therefore, is not mainly an issue of perfecting policing measures. Rather, combating counter-revolution and advancing socialism are a matter reducing inequalities in power, privilege and decision making. And, it is a matter of combating the backward culture, the backward social programming. Replacing old culture with new culture. This is part of continuing the revolution under the dictatorship of the proletariat. This is continuous revolution, Cultural Revolution. It is key that we look at the problem of counter-revolution through the lenses of power, of structure, not through the lenses of the police. In many ways, the police paradigm of counter-revolution shares similarities with the Great Man theory of history, the idealist conception that historical progress is achieved by the acts of individual great men. The Leading Light Communist approach to counter-revolution is really just Marx’s historical materialism applied to the problem of counter-revolution.

We uphold the Stalin period in a general, but non-dogmatic way. Their errors are our errors, so to speak. We do not simply wash our hands. We do not simply walk away. Accepting this is part of what being a real leader is. Yet, we see the limitations of Stalin’s approach, one that was also shared by Maoists to an extent. However, the Maoists began to break with that, even if they did not break with it consistently and even if their practice lagged. Revolution is a long road. We will make many mistakes, twists and turns, false starts, retreats. This is why it is so important to put revolutionary science in command. Today, this means putting Leading Light Communism in command. Science learns. And, quite frankly, we have learned many powerful lessons from Stalin. Let’s not shrug our responsibility. We are Leading Light Communists, the vanguard of the world revolution. The people deserve an honest accounting  from us.

Red Salute to all those who came before!