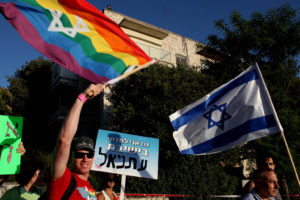 In a recent letter, Israel’s Interior Minister Gideon Sa’ar instructed the Population and Immigration Authority and the Jewish Agency to grant citizenship to the spouse of any Jew, regardless of the sexual orientation of the couple. “I do not see a distinction between Jews in heterosexual marriage and those who wed in same-sex marriages abroad in accordance with the law,” Sa’ar wrote in his letter to the Population and Immigration Authority. Yet Israel continues to deny rights to Palestinians. Most Palestinians are not only unable to attain Israeli citizenship, they are also not allowed to return to their land at all. Israeli policy is that the homosexual partners of Jews have more right to the occupied land of Palestinians than Palestinians themselves. Israeli policy grants more powers and rights to homosexual partners than Palestinians. Thus Israeli policy recognizes the longstanding connection between First World gender activism and imperialism. Israeli policy recognizes that appealing to First World homosexuals in Israel and abroad is a useful tool in imperial conquest. Israel’s policy is not unlike that of other Western imperialists today.

The Israeli policy stands in a long line of liberal imperialism. Social-democratic reform reduces contradictions, reduces social tensions, within the imperial population. Imperialists often extend social-democratic reform as a way to forge the social unity to embark on imperial conquest. Thus liberal imperialism, social-democratic imperialism, is often more efficient than traditionalist imperialism. Social-democratic, pink reform also deflects Western attention from the genocide of Palestinians. Furthermore, pink-friendly Zionism is contrasted to the intolerance of Palestinian Islamic and patriotic movements in the imperial media. More and more, imperialist wars and occupation are portrayed as liberal, cosmopolitan civilizing missions. Less and less, imperialism is portrayed as a traditionalist civilizing mission, as the white man’s Christian burden. Just as the imperialist aggression against Afghanistan, Iraq, and Iran are sold under the banner of First Worldist feminism, so too is the occupation of Palestine.