Understanding the Kurdish resistance in Syria 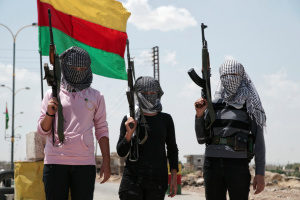 Very recently, an alliance of Kurdish forces and their allies has fought off an Islamic State offensive. Kobane, Syria was the focal point of the battle. The Islamic state is a horribly reactionary force that has been encouraged and supported by the imperialists, often through back channels. The Islamic State makes clear its genocidal intentions toward the Kurds. Not long ago, the Islamic State tried to wipe out Kurdish Yazid communities. In the face of such brutality, many people correctly rallied to defense of the Kurdish people who were facing genocidal annihilation. Many were inspired by the brave Kurdish women fighting for their freedom. Even though it is very correct to rally to the defense of the Kurdish people, it is important that we have clarity about the nature and role of the Kurdish organizations.

The Kurdish organization that was most significant in beating back the Islamic State in Syria was the People’s Protection Units (YGP), which are connected to the Kurdish Workers’ Party (PKK), which is strongest in Turkish Kurdistan. Also aiding the fight were the “Peshmerga,” the Iraqi Kurdish militias of the Patriotic Union of Kurdistan (PUK). The PUK is openly capitalist has a long history of collaboration with imperialism. However, the PKK has a history as a nominally communist organization, although they have now dropped that label. Today, the PKK are an openly social-democratic organization and do not pretend to be communist. Because of their leftist rhetoric and egalitarian practices, some have supposed the PKK and its satellite organizations  to be some kind of vanguard of the Syrian revolution. Because of their long history of conflict with the racist Turkish regime, some have supposed them to be reliable anti-imperialists. This is not so.

The reality is that the PKK and its satellite organizations are nationalist organizations first and foremost. Their main interest is in establishing an independent Kurdistan. As such, they ally with whatever force can help them in achieving this end. This is why at the beginning of the Syrian civil war, the PKK-YPG was in an alliance with the Assad regime, which ceded areas to them with almost no conflict. (1) This is why the PKK-YPG is today aligned with some parts of the Free Syrian Army (FSA) against both the Islamic State and the Assad regime. (2) This is why today, they seek coordinate with the United States’ bombing campaign. (3) (4) This is why they ask the United States for support in their fight in Syria. (5) This is why they call on material support from Europe. (6) The United States has had secret talks with the YPG’s political wing since 2012. Former US Ambassador to Syria Robert Ford:

“The PYD-YPG is a Syrian group that is moving on the ground, so we had an interest in understanding their viewpoint and ideas..” (7)

According to one source:

“Kurdish sources familiar with the indirect U.S.-PYD talks told Foreign Policy that Washington is currently pushing the PYD to distance itself from the Assad regime by joining the Syrian Coalition, working with the FSA, and improving ties with the KNC and Barzani… The recent agreement between the YPG and FSA factions to fight IS together might reflect a PYD eagerness to meet preconditions for U.S. assistance.” (8)

The willingness to ally with imperialism to achieve its end is not new. The Party of Free Life of Kurdistan (PJAK) is the PKK’s satellite organization in Iranian Kurdistan. Because of the United States’ conflict with the Islamic Republic of Iran, PJAK has sought to position itself as a US asset in the region even though they are still on the US list of terrorist organizations. The PJAK made its intent known through Western journalists:

“These words are not quite coded speech, but they are PJAK’s way of batting its eyelashes at the United States, of implying that the world’s superpower and this ornery Maoist gang might find common cause against Tehran. Most of the freedoms Turkish Kurds have been eager to spill blood over have been available in Iran for years; Iran constitutionally recognizes the Kurds’ language and minority ethnic status, and there is no taboo against speaking Kurdish in public. The PJAK Kurds want more: They want secular democracy, they say, and they want the United States to go into Iran to deliver it to them. Kurds enthusiastically boycotted the sham election that won Mahmoud Ahmadinejad Iran’s presidency last year, and they speak of him in doomsday terms that would fit in at the American Enterprise Institute but sound awkward in this rebel camp where everyone’s heroes are Che Guevara and Spartacus.

‘Ahmadinejad does not respect the Sunnis. He thinks they are agents of Israel and the USA,’ says PJAK spokesman Ihsan Warya, an ex-lawyer from Kermanshah. (Most Kurds are Sunni.) Warya nevertheless points out that PJAK really does wish it were an agent of the United States, and that they’re disappointed that Washington hasn’t made contact.” (9)

Although the PKK and its satellites do not have a deep history of imperial collusion yet, they are not in principle oppose to it if imperialism is perceived to serve their nationalist ends.  As the Syrian conflict develops, it looks like they are positioning themselves to try to be part of a Western-supported coalition. Thus the PKK is not in principle different from the PUK in Iraq nor is it in principle different from numerous other nominal leftist organizations that have sought support from the United States ranging from the Mujahedeen-e-Khalq (MEK) to Iranian Maoists to the Communist Party of Iraq. This is the problem with revisionist and nationalist organizations. Since they are not led by true science, by Leading Light Communism, even if they claim to be revolutionary, they can become instruments and dupes of empire.

Empire has a complex strategy in Syria and the region. It is playing multiple sides, hedging its bets so that its position is advanced no matter what the outcome of the Syrian conflict. Its overall goal is to weaken the region, especially the Iranian-Assad-Hezbollah axis. It has done this by fostering sectarian conflict on multiple sides. With one hand it supports the Islamic State, with the other it bombs them. We must remember the principal duty of progressive people is to oppose imperialism, not opportunistically cheer-lead any particular force on the ground. Let’s be clear, the Kurdish people have the right to defend themselves from genocide. We would like to see a Kurdish people who were truly free, but that freedom should not be bought at the expense of any other oppressed people of the region. We would like to see all the oppressed of the region thwart imperial plans by overcoming their differences with each other, by uniting. If they put truth, science, Leading Light Communism in command, the path to real freedom will open.