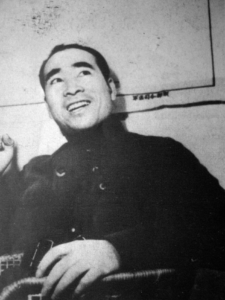 The second category is famously represented by Mao and the Gang of Four. Even though Mao waffled in his practice, his stated line was to support class struggle within China. Yet Mao and the Four viewed the First World working bourgeoisie as allies. Mao is consistent throughout his writings on this point. Before and throughout the Cultural Revolution Decade, the Four also made numerous statements counting the First World working bourgeoisie as a class ally.  This was the dominant line within the Chinese Communist Party during the Cultural Revolution Decade. Crypto-Trotskyism did not appear out of thin air. Some of the blame must be put on Mao and the Four. Those who place the blame elsewhere are dogmatists who are more worried about defending Mao and the Four as individual leaders than historical truth. Leading Lights are opposed to those who falsify history.

In the third category is the famous ally of Liu Shaoqi: the revisionist Peng Zhen. According to an anonymous document that circulated Shanghai in 1967:

“…Chinese capitalists, in his [Peng’s] opinion, were more progressive than the American working class! And the Chinese bourgeois political parties were further to the left than the Communist parties of Europe!

He visited the homes of a lot of capitalists and found their lives Spartan. “A Soviet worker lives better than most of our capitalists!” he said.

As long ago as 1957, he said that China’s main contradiction was no longer between workers and capitalists but rather between man and nature. ‘The great challenge now,’ he declared, ‘is to change China from a backward country to an advanced socialist one.’…” (1)

It is important to note that this was circulated by certain Maoists as an attack on Peng.

Peng was the revisionist mayor of Beijing who tried to stop the Cultural Revolution in its earliest phase. Peng tried to confine the Cultural Revolution to the academic sphere. Yet Peng was more correct on global class than Mao and the Four. Peng had more correct global class analysis than some of his critics. Peng was using his  more correct view of global class to push a version of Theory of Productive Forces and throw cold water on proletarian class struggle within China. If  “workers” in the United States and European “communist” parties are class allies, then why wage class struggle against Chinese capitalists? After all, Chinese capitalists are much poorer and less bourgeoisified. If you aren’t going to wage class war against the First World working bourgeoisie, then why wage it on Chinese capitalists? It should be admitted that Peng’s argument is more consistent than Mao’s position of waging class struggle on Chinese capitalists yet not waging class struggle against the working bourgeoisie in the United States. This isn’t to say Peng was anti-American. Peng’s argument is a reductio of the class-struggle line in general. Mao let the majority of  First World people off the hook. Peng used Mao’s class assumptions about the First World to let everyone off the hook. Peng’s argument was probably widespread if it was being advocated by someone as high up in the power hierarchy as Peng, the mayor of Beijing.

The closest major Chinese Maoist of the fourth category is Lin Biao. Lin Biao’s line is closest to the correct line of upholding class struggle against both the Chinese capitalists and against the First World as a whole. Even if there are ambiguities in Lin’s actual work, the implication of Lin’s line is to see the First World as a whole and Third World as whole as main units of functional analysis. The implication of Lin’s line is to, for the most part, write-off the First World struggles. Black liberation fighter Robert F. Williams paraphrased Lin in 1967 , “In keeping with the principles of people’s war, wherein the great masses of exploited peoples of the world represent the rural masses surrounding the cities (the exploiting industrial countries)…” (2) Bob Afakean, arch-revisionist leader of RCP,  criticized the Lin Biao line in 1983, “Lin Biao was a top leader of the Communist Party of China in the 1960s and he is associated with the line of singling out U.S. imperialism for a common onslaught from the ‘third world,’ with simultaneous national liberation wars defeating U.S. imperialism throughout the ‘third world,’ and even possibly destroying it altogether.” (3)

Lin’s line makes even more sense if we consider it in conjunction with the theory that the new bourgeoisie in China was principally comprador at the time, agents of imperialism rather than big imperialists themselves. In 1967, “ultra-leftist” Qi Benyu writes, “[t]he principal contradiction between imperialism and the Chinese people is the principal contradiction in modern Chinese society. Imperialism is the first and most ferocious enemy of the Chinese people.” In stating this, Qi is not denying that class struggle needs to be waged domestically in China. (4) After all, Qi was connected with the left wing of the Cultural Revolution Group and the red-guard power seizures of 1967. Rather, Qi’s point is that the domestic class struggle in China is an extension of the global class struggle. This is the case because the new bourgeoisie can be principally comprador. This kind of argument could be advanced against the Adverse Current, especially the right wing of the PLA opposed to Lin. The Adverse Current claimed that the mass movements were hurting the capacity to defend against imperialist aggression. Qi’s article implicitly compares the Cultural Revolution mass movements of the late 1960s to the Boxer Rebellion. He compares the new bourgeoisie, Liu in particular, “the top Party person in authority taking the capitalist road,” to the old time compradors. Later, Lin Biao’s fall, like Qi’s, was linked to the so-called “May 16th Corps.” However, this was mostly a contrived police rewriting of history even though there are some ideological points of contact between the two trends.

These lines of thinking undermine the Peng argument for the Theory of Productive Forces. It was no accident that the left wing of the mass movements rallied under Lin’s work to oppose Zhou Enlai and Chen Yi in 1967. Yet to what extent people connected the ideological dots is not known.

Zhou Enlai, Deng Xiaoping and Chen Yi, with Mao’s support, were the architects of the shift away from Lin’s line of seeing the Western imperialists and social imperialists working in concert, as partners, to oppress the Third World in the 1970s. They were the architects of what would become eventually known as the Three Worlds Theory of the 1970s. Those who upheld an incorrect version of Three Worlds Theory, that the Soviet social imperialists were a bigger enemy to the world’s peoples than the Western imperialists, ought to consider whether such is even mathematically plausible considering that vast majority of the Western populations were grossly parasitic even in the 1970s. Leading Light Communists are willing to ask the hard questions about history. If we are going to go further toward communism, then we have to learn from the past. This requires an honest accounting.