The other 9/11, brief thoughts on Chile, America and China 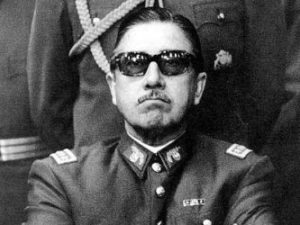 9/11 is a day that will live in infamy, but not because of the attacks on the US that killed over 3,000 people. It is less well known is that September 11th is the anniversary of the overthrow of the elected government of Salvador Allende by general Augusto Pinochet’s CIA-backed forces in Chile. The coup in Chile led to a bloody US-sponsored dictatorship that lasted from 1973 until, roughly, 1990. Like the Pinochet period, the post-Pinochet period is characterized by comprador politics. However, comprador rule in Chile today is not as heavy handed, crass and overt as it was under Pinochet. Certainly more people died at the hands of Pinochet, as a result of US policy in Chile, than died in the attacks against the US in 2001. Certainly more died at the hands of the brutal military and police dictatorship, died at the hands of death squads, and died by the structural violence of capitalism-imperialism than died in the New York attacks. Yet Americans get teary eyed over the latter, not the former. America’s reaction to 9/11, once again reflects that Americans, generally speaking, do not value the lives of people in the Third World. The coup in Chile was just one more crime in a century of crimes perpetuated against the peoples of Latin America and the Third World by the US. The death toll of US imperialism runs into the billions. By comparison, the few thousand who died in the 2001 attacks are a drop in the ocean.

Even though the government of Salvador Allende leaned toward the Soviet Union, having pro-Soviet regimes in Latin America was preferable to the traditional domination by Western imperialism, especially US imperialism. In addition, some of the Soviet-leaning forces in Latin America had a popular and progressive character. Since Europe destroyed itself in World War 2, Europe could no longer hold onto its colonies in the Third World. The US largely took over the management of Europe’s colonies. Thus the old European colonialism was replaced by US neocolonialism. The US reached such imperial heights that nearly the entire US population, including the US working class, became exploiters of the Third World. For almost all of the post-World War 2 period, overall Soviet strength never really matched US strength.

At the time of the 1973 coup in Chile, China was headed down the road of restoring capitalism. When Mao was moving toward the US and meeting with Henry Kissinger, Lin Biao’s generals were turning up the rhetorical heat on the US. Thus there seems to have been  a two-line struggle within the Chinese Communist Party. Lin Biao’s policy dominated the Communist Party from 1965 to 1970. Lin Biao’s policy of fighting imperialism as a whole and supporting national liberation struggles began being criticized in Zhou Enlai’s Foreign Ministry as ultra-left. What replaced Lin Biao’s line was an incorrect line that targeted the Soviet Union as the supposed main threat to the world. The new line mainly sought allies against the Soviet Union amongst the comprador states of the Third World as opposed to national liberation and revolutionary forces. Thus China moved away from supporting local people’s war as part of a global people’s war. Even worse, the new line identified Europe and other Western imperialists as potential allies, middle forces, in China’s struggle against the Soviet Union. And, eventually, the US itself became a de facto ally of China — although this fact was left unspoken, even if it was hinted at, in the Chinese press. This new line was reflected in China’s response to Chile’s 9/11. China went from being a base area of the global people’s war in the late 1960s to being one of the first regimes to recognize the CIA-backed Pinochet dictatorship. China’s new line had devastating effects on the proletarian movement worldwide, sending the world revolution into confusion and demoralization. Ironically, one of the reasons that China broke from Khrushchev decades earlier was that Khrushchev was too pro-US. And, decades later, the China of the post-Lin Biao period would become even more accommodating to Western imperialism. The architects of this new Mao-supported line had been people like Chen Yi and Deng Xiaoping, both capitalist roaders. Anti-Maoists like Deng would complete the restoration of capitalism after Mao’s death and the defeat of the Gang of Four in 1976. It is a failing of the Maoist movement that it never had the political courage to confront the errors of the Mao era, including the errors of Mao and the errors surrounding the power struggles involving Lin Biao. The communist movement still has lessons to be learned from the other 9/11.