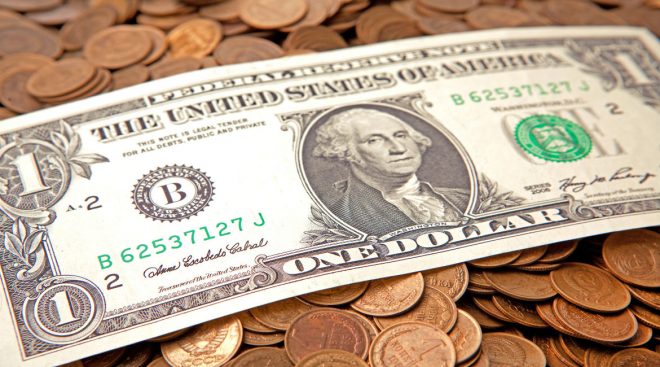 The Global Hegemony of the U.S. Dollar, a Brief History

Since the United States entered into the Second World War considerably late, it did not suffer as much damage or casualties as other countries had. It also helped that its geographical location kept its cities from suffering the infrastructural damage seen across cities in Europe and Asia. This, in part, helped the American Empire to replace the British Empire (although Britain is still an imperial power) as the global hegemon, especially when the American economy took less time to recover in comparison. And so began the all-conquering march of the U.S. Dollar, undoubtedly the American Empire’s most powerful expression of its global domination and global monopoly.

As per requirements during WWII, most of Europe under a war economy had to import its consumer goods. The United States, which had yet to enter into the War, was readily available to trade consumer goods with Europe for gold; and it had done the same in the First World War, to which it was also a latecomer. In other words, over the course of the two World Wars, it had been accumulating these gold reserves so that by 1944 it acquired two-thirds of the world’s reserves, thus overwhelming Europe’s markets with dollar loans. Having gained the economic and monetary upper-hand, the U.S. sought to make the Dollar the world’s reserve currency. In that same year, the Bretton Woods Conference — also known as the United Nations Monetary and Financial Conference — reached an agreement on a series of new rules for the post-WWII international monetary system, leading to the creation of the International Monetary Fund (IMF) and the International Bank for Reconstruction and Development (IBRD). In other words, almost every currency in the world was required to be tied to the Dollar at a fixed rate, and the Dollar could only be tied to gold. This catapulted the United States to global superpower status.

While its client states (such as South Korea, Saudi Arabia, and Colombia) and its support for proxy forces were the worldwide economic and military fronts of its power projection platform, the Dollar was the international monetary facet. With Western European powers indebted to the U.S. Dollar, the United States was free to spread its influence throughout their states and their politics, helping them to crush many of the communist and labour movements within their own countries. It also helped to seal the Western European states’ alliances with the United States with the shared goal of destroying the Soviet Union, as well as uniting in attacking other countries in Eastern Europe and countries in the Global South that refused to allow U.S. capital into their countries.

However, between 1965 and 1971, U.S. imperialism encountered a problem: the U.S. lost over 50% of its gold which meant there was nothing to back its Dollar currency, unless it could reach some kind of solution. How did the U.S. lose a large amount of its gold reserves? During the 1960’s, the United States’ balance of payments deficits exceeded its gold stock — its international outgoing payments and expenditures over that period of time had become excessive — such that it became unable to redeem dollars for gold at the official price. By 1971, the U.S. reached an international monetary crisis point. What was happening during this particular period of time? The U.S. War on Vietnam, where the U.S. military had a very robust presence with a total of 3,403,100 American military personnel having been deployed in the Southeast Asia region by the end of the war, involved a twenty-year imperialist onslaught against the Vietnamese liberation forces, starting in 1955 and ending in 1975. From 1961 to 1975, the U.S. spent more than $141 billion trying to restore colonial rule over Vietnam and keep North and South Vietnam divided; and as we know, it ended in a victory for the resilient anti-imperialist forces of Vietnam. For this specific imperial venture, the financial costs were so great for the U.S. that it had started to borrow money from Europe — but it was unable to repay the debts with its dwindling gold stock and increasing deficits. The U.S. tried to resolve the issue with the debt repayments by printing money to make gold more expensive, but that failed and the deficits continued to grow.

Because of this crisis in 1971, then-President Richard Nixon suspended the Dollar’s gold exchange rate (or its ability to be converted to gold). As a response, the fiat system was introduced to remove the need for gold and fixed exchange rates, while still maintaining the Dollar as the international currency. The fiat system meant that there was no real, material, or physical commodity to back the U.S. Dollar and therefore no real value; and yet, the world’s currencies are still tied to it. Indeed, it is a curious phenomenon, but such is the power of the Dollar as one political analyst describes,

“…[A] kind of money that relied on the trust of the public and the legitimization of the government, rather than relying on a real commodity. As a result, the US dollar was, metaphorically speaking, based on thin air; it had no value as a physical entity; its value was based solely on trust.”

And with constantly fluctuating world currency exchange rates, there is an increase in value of the U.S. Dollar, which comes with the decrease in value of poorer nations’ currencies — thus facilitating cheaper exports created by cheap exploited labour in these Third World countries. If any of these poorer nations were to gain independence and challenge U.S. global hegemony, as Cuba (and many others like it) had done to liberate itself from the backward mafia state it once was, then it would mean that the United States would do what it can to cut them off from the world’s resources by any means necessary including force.

Whether it be in the form of imposing economic sanctions, CIA-backed coups, or illegal bombing campaigns, with that kind of power and control over the world economy the U.S. can act unilaterally, defying the UN Charter and all international law.

5. Teymuri, Saed (2018). The Story of the US Empire: Military and Monetary Hegemony. The Stalinist Katyusha. Retrieved from https://stalinistkatyusha.wixsite.com/stalinist-katyusha/single-post/2017/05/02/The-Story-of-the-US-Empire-Military-and-Monetary-Hegemony?fbclid=IwAR3A1af4ebmk0ef_bmShnlAEl02NUFA1l9HlUZj81o_WcyOtWjs5AWvbHs0