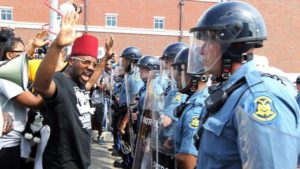 On August 9, 2014, Michael Brown, an unarmed, 18-year-old Black man, was fatally shot by Darren Wilson, a 28-year-old white police officer, in Ferguson, Missouri, USA, a suburb of St. Louis. The evidence suggests that the shooting was unwarranted and, in part, racially motivated. As a result, protests occurred throughout the United States highlighting the problem of police brutality  and racism. In Ferguson itself, protests have been continuous since the shooting. A militarized police department occupied the streets there, occasionally harassing and arresting protesters in the mostly Black community. And, after the grand jury chose not to indict Darren Wilson, riots broke out. This resulted in many arrests and much damage to property. Cars and businesses were seen burning in the media. On social media, a new phrase began to find its way across peoples profile pages: “Black Lives Matter”, which then became a loose network of activists across the US seeking to end police terror of Black communities in the United States. While the phrase “Black Lives Matter” was originally coined during the acquittal of self-styled “neighborhood watchman” George Zimmerman in his trial for the murder of 17-year old Black youth Trayvon Martin, the phrase didn’t become widely used until the death of Mike Brown at the hands of Darren Wilson.

It goes without saying the the resistance to police should be supported and strengthened. It goes without saying that national oppression and police terror must be opposed by any means necessary. Those who stood up and spoke up against injustice deserve support. We salute all those who took to the streets against injustice. Leading Light has advanced the line of “resistance in the First World; revolution in the Third World.” Standing against the police terror, white supremacy, and internal colonialism certainly counts as resistance. Even so, we must be materialists about the facts on the ground.

Some First Worldists see the events of Ferguson as heralding some great, new wave of discontent that can be channeled into First World revolution. They embrace ridiculous rhetoric about the Ferguson riot being a people’s war or the beginnings of a new anarchist world. There is even a meme floating around that borrows an image of an Irish Republican woman with a gun that states “arms up, shoot back.” Even with virtually the entire “far-left” of the United States focused on Ferguson, sending activists, etc., it is significant to note that the reports of shots fired on police from the resistance in the past couple years has been few and far between. This is in a country where firearms are legal and easy to acquire. There is a big reality gap between “far-left” rhetoric of First Worldists and conditions on the ground. Ferguson is not the Third World. It is not even Northern Ireland, as the meme suggests. There also is a big reality gap between the rhetoric of the First Worldist “far left” and what they are really prepared to do. This kind of over-the-top rhetoric, guerrilla pornography, might have some limited use at the level of low science, it may work to recruit the unadvanced, but we should not mistake this kind of myth making for reality.

Police terror and mass incarceration exists, and the most directly affected have been overwhelmingly Black and Brown people. National oppression is still an issue in the United States, although the contradiction between the white nation and these internal colonies is not nearly as acute as it once was. As scientific revolutionaries, we have to understand long-term trends, not get swept up in what happens to be in front of us at a given moment. There are very real, material reasons that national liberationist politics do not resonate in the United States nearly as much as they once did. The long-term trend is toward integrating the African diaspora of the United States into a multi-national First World. National oppression will continue within the First World. Every so often, these colonial contradictions may even lead to rebellion and resistance. However, the contradictions are not so great that they will lead to revolution at present. Nor are the contradictions within the First World so great that they can sustain a people’s war. To think as much is simply delusional utopianism.

All things being equal, having people resist the system inside the United States is better than having them not resist. This is true even if the First Worldists doing the resisting are delusional about the revolutionary possibilities within the heart of empire. For those who are not particularly advanced, this kind of resistance can be a healthy way to learn. It can also be a learning moment for others about what is possible at present. Resistance is a good thing. Even so, the most advanced, should not lose sight of the real task. The Global People’s War of the Leading Light will not emerge from within the First World. Our people are the real proletariat, the masses of the Third World. Our duty is to the global poor. Those who are advanced enough to be channeled into real revolutionary work should not get distracted from the main task, even as we offer our material support for such resistance within the United States. We must concentrate our forces against the weakest links of the imperial system. This means our battle is principally in the Third World.