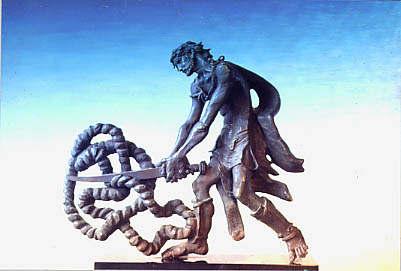 Solving the Gordian Knot, instruction on method and decisiveness

According to legend, in the city of Telmissus, there was a massive knot looped again and again around the front of an oxcart. Rope over rope, the knot endlessly turned in on itself. It was said that the person who was able to untie the knot would conquer the world. Many pretenders had come before and been unable to solve the puzzle. Alexander examined the challenge that had defeated so many before. Looking at the knot, the student of Aristotle drew his sword and slashed away. The knot fell to the ground. Alexander went on to conquer.

We must be as Alexander: decisive, bold, creative. We must not fight battles on the enemy’s terms. Do not let them set the rules. We play by our rules. Do the unexpected. In debate, direct your blows at the heart of an enemy’s argument. Do not be distracted. Do not let your blows be deflected. Do not be baited with sophistry or lies. Our strength is we are armed with the most advanced revolutionary science, Leading Light Communism. Truth is on our side.