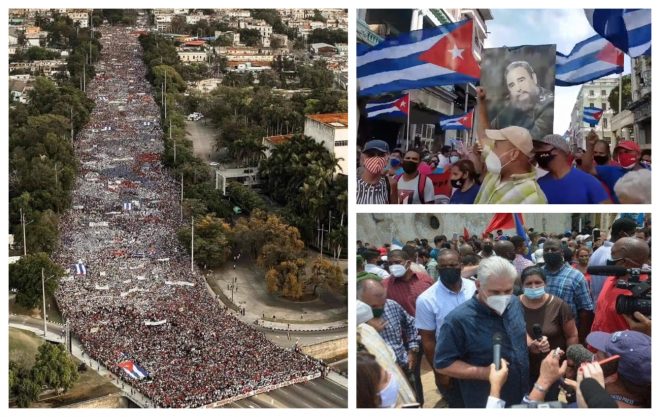 Solidarity With Cuba Against Imperialist Provocations

Because of the 60-year long illegal and inhumane blockade imposed on the country by the United States, Cuba has faced undue hardship that includes food shortages, lack of medical supplies, and power outages. And due to the ongoing COVID-19 pandemic, it is being exacerbated. A relatively small demonstration took place in San Antonio de los Baños against these effects from the crippling U.S. sanctions; President Miguel Diaz-Canel immediately travelled there to greet the demonstrators and speak with the people about these grievances.

However, there are U.S.-backed reactionary, counterrevolutionary groups that are still very much active in Cuba who are taking advantage of the current state of emergency. Once again, they are attempting to foment chaos and disorder, aiding imperialist-led regime change efforts to destabilize the country and reverse its revolutionary gains. While Western mainstream media — in support of the latest attempted Color Revolution — unsurprisingly chose to highlight and amplify the voices of reaction, millions of Cubans (who far outnumber the counterrevolutionaries) took to the streets to show their support and defend their nation’s sovereignty, independence, and government.

We would also like to take this time, despite the extreme challenges the country is facing, to commend Cuba for its internationalist effort throughout the pandemic in sending its doctors abroad to aid in the fight against COVID-19, as well as developing vaccines that will be distributed to poor countries.

Sanctions are an act of war and are tantamount to an economic atom bomb since they are a form of collective punishment. They can also be deadly, as seen with the more than 500,000 Iraqi children who were killed by U.S. sanctions during the 1990’s. After all, the U.S. Department of State has explicitly stated in the past that the goal of the blockade against Cuba is to “weaken the economic life of Cuba,” and “decrease monetary and real wages, to bring about hunger, desperation and overthrow of government.” Thus, it is important to stand in solidarity with Cuba, take a principled stance against imperialism, and to demand that sanctions be lifted immediately.

Featured image: Cubans marching in defense of their nation’s sovereignty, with Diaz-Canel joining them, on July 11, 2021.