Sailing the seas depends on a helmsman 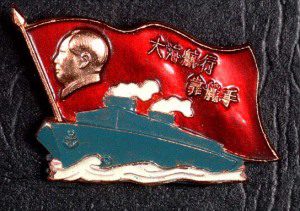 Water has a special place in socialist propaganda of the past. It was by swimming in the Yangtze river that Mao returned to politics after being sidelined. Mao’s swim was one of the symbols of the Cultural Revolution. Stalin was portrayed as a captain piloting the ship of the Soviet Union through rough waters. This metaphor reached new heights under Mao. Mao was called “the helmsman” of the Chinese ship. One of the most popular songs of the Cultural Revolution opened with “Sailing the sea depends on the helmsman.” This quote, which was originally from a song, began being attributed to Lin Biao over the course of the Cultural Revolution.  Lin Biao was quoted quoting the song. A jealous Jiang Qing later grumbled that Lin Biao did not originate the helmsman quote.

This metaphor provides insight into how the Maoist regime saw politics and leadership. Mao saw politics and revolution as a constant flux, motion was constant. Politics was not an open field that could simply be walked across unobstructed, but a kind of river with many currents that had to be navigated. Mao saw this as a positive thing. He reportedly quipped, “there is nothing worse than a stagnant pond.” Such sentiments are not original in the Chinese or Western tradition. Similar thoughts have been expressed for thousands of years. The pre-Socratic Heraclitus had a similar sense of the world, for example. Mao saw this as part of dialectics, although there is nothing specifically dialectical about acknowledging the flux of the world.

This kind of outlook also helps explains why, for Chinese Maoists, the correct political line is not the one in the exact middle, dead center, between the far right and far left. The correct political line was not called the “center” in Maoist discourse. “Centrism” was seen as an error just as “rightism,” “ultra-rightism,” and ultra-leftism” were. The correct political position was always seen as being “on the left,” which for Maoists staking a position ahead of the masses to pull them forward. This also accounts for why Maoists didn’t just see excess as necessary, but sometimes reveled in excess during the Cultural Revolution. It was the idea that sometimes it is necessary to steer the ship in ways that may seem to some to overshoot the target at times.

When you are navigating a river, you do not go in a straight line from point A to point B. Rather, you traverse the distance by steering the currents. If a current takes you too far left, then you compensate by riding another current. And if that current takes you too far left, you enter into another current to compensate. In other words, arriving at the correct political policy is not seen as a kind of practical syllogism where you state your destination and then implement the most efficient course, a straight line, to get there. To arrive at the correct places, errors are inevitable, even necessary. Going too far one way, then going too far another way, constant adjustment, is part of getting where you need to go. This is why Mao favored keeping rightists in the Communist Party. He disagreed with their line, but he needed such people in order to steer the ship. Running the revolution is a matter of elevating leftists and ultra-leftists when necessary, but also elevating rightists when that becomes necessary. This is one of the reasons why Mao made sure not to purge Deng Xiaoping during the Cultural Revolution even though Mao was well aware that Deng Xiaoping had the same kind of line as the rightist-revisionist Liu Shaoqi, Mao’s main opponent. Mao thought it necessary to keep the rightist line around, but checked. Mao made sure not to purge Deng Xiaoping, but merely put him on the back burner until he was needed later. Similarly, the Cultural Revolution left was purged with the removal of people like Chen Boda and Lin Biao, but a much weaker version of a similar line was kept around in the Gang of Four. This is also why Mao tended to mix criticism of the right with criticism of the left, especially in the 1970s as Mao tried to move toward a more stable, conservative regime than that of the Cultural Revolution.

The helmsman model of leadership is connected to the cult of personality. It is not an entirely scientific process guiding the revolution, but a man with the unique ability to navigate the waters, man with the ability to correctly define a right to left range of discourse. It is a special kind of talent that is seen as key, not the technical ability to implement a practical syllogism in a straight-forward manner. The helmsman model is more connected to the great man and the cult of personality than the idea of science in command. These considerations intersected with the struggle between Lin Biao and Mao. Although Lin Biao was one of the biggest promoters of Mao’s cult of personality, he was also accused of trying to disconnect Mao Zedong Thought from Mao the man. Lin Biao’s praise of Mao Zedong Thought was seen by some as a way of devaluing Mao the man. Lin Biao had his own reasons for elevating Mao Zedong Thought because he was appointed successor to Mao during the Cultural Revolution. He knew he would need to establish his legitimacy and authority on another basis than closeness to the living Mao once the aged Mao had passed. This is similar to how Mao complained of being turned into a “clay Buddha” after the Great Leap. A demoted Mao was to be a kind of ideological, spiritual leader, but one who kept his hands off the machinery of the bureaucracy. Even though Mao superficially criticized the cult of personality, a “humble pie” gesture totally compatible with the cult, the way that Mao guided power was very much based on it.

The helmsman model is reflected in Mao’s choice of successor. One of many reasons that Mao chose Hua Guofeng is Mao hoped Hua Guofeng could navigate using the left and right as rudders just as Mao did. One reason this did not workout is because Hua Guofeng was too weak. Even though they tried to establish a Hua Guofeng cult in the last year of Mao’s life, he simply did not have the prestige to make it work as Mao had. As it turned out, he was not enough of a counterweight to the left and the right. After Hua Guofeng moved against the left, after he purged the Gang of Four in 1976, he himself got stripped of power, demoted, by the right, by Deng Xiaoping.

Another model is one that sees reaching goals using science as more detached from specific individuals. In this model, the center is the goal, right and left are always deviations. To be at the center is to be just ahead of the masses to pull them forward. Left errors are not simply “left in form, right in essence,” as the Maoists tended to see them. Once the goal is set, it is merely a matter of the technology of implementation. Traversing from A to B is more like traversing an open field. One does not navigate currents to get to one’s destination. It is one alternative way of looking at power, policy, and error.

To understand how authority and legitimacy worked, the role of the individual leader and the power structure, one has to look beneath the surface. It is necessary to look at the actual models that inform and structure the exercise of power. Words, self-description, are only one aspect of how we must understand power. We must look at practice. As we initiate the next great wave of revolution, we could leave these topics unaddressed, simply hoping they work themselves out, but as scientists, as Leading Lights, it makes more sense to examine the pluses and minuses of various historical approaches against each other and against new approaches. Nothing is off limits. All-powerful Leading Light Communism is an all-round scientific advance. The masses demand victory. Truth matters. We are in it to win it.