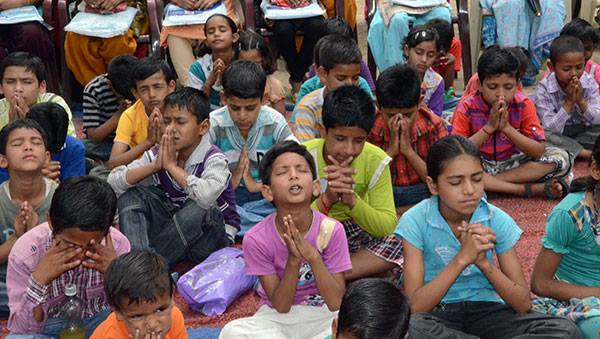 On Leading Light Communism and Religion

Across the globe, religious extremism poses a serious threat to the revolutionary cause. In many third world countries, terrorist mercenary groups, motivated by supposed “religious purity,” are funded and armed by the United States, and other imperialist countries. These extremists are terrorizing secularists, political activists, ethnic minority groups and other innocent civilians in massive numbers. In India, the imperialists openly fund and arm “Hindu” extremist groups to murder and terrorize Muslims, Buddhists and Christians [1]. In the neighboring countries of Bangladesh and Pakistan, the imperialists send massive amounts of money and material support to “Islamist” groups to terrorize and murder non-Muslims [2][3]. The aim of the imperialists is a classic “Divide and conquer” strategy which aims to turn the oppressed against each other and weaken unity among the people. This strategy is an old one, and has been exploited for centuries by the imperialists to conquer and exploit the peoples of the colonial and neocolonial world.

As a result of recent developments in religious extremism on the global stage, a revisionist and “ultra-leftist” line influenced by the growth of the reactionary “New Atheist” movement, has emerged. This line calls for denouncing religion and outright attacks against comrades and institutions of faith. Individuals and groups supporting this line claim that religion itself is the underlying cause of sectarian terrorism and violence, and that the masses should be berated and criticized for their faith. This line is at best, an erroneous position that absolves capitalism and imperialism of the guilt for the maldevelopment, impoverishment and suffering of the third world in favour of a simplistic theory that the suffering of the masses can be faulted on their own supposed “superstitious ignorance.” This is also called “blaming the victim.” At its worst, it justifies the supposed “civilizing force” of the secular Imperialist powers in their destructive wars and terror campaigns against third world people. Either way, this line is both reactionary and harmful to the revolutionary movement.

Along similar lines, many so-called Communists are equally quick to dismiss or attack people of faith. They have been known to quote Marx when he states “Religion is the opiate of the masses,” claiming that religion is simply an addictive drug used by the bourgeoisie to oppress the people. However if one examines Marx’s full statement, the true meaning becomes clear.

“Religious suffering is, at one and the same time, the expression of real suffering and a protest against real suffering. Religion is the sigh of the oppressed creature, the heart of a heartless world, and the soul of soulless conditions. It is the opium of the people.”

In context, we see that Marx recognized that religion was not simply a series of superstitions and rituals performed by the ignorant, but a tonic for the pains that come with oppression. It is important to recognize that having faith is an attempt by people to soften the harshness of their lives. If we mock the oppressed for attempting to relieve their pain we will be harsh and heartless. We must show the oppressed that Leading Light Communism is their path to true liberation without spitting on their deeply held beliefs.

So what is to be done?

It is important that Leading Lights expose these terrorists operating under the guise of “religious purity” as spineless traitors and agents of the imperialists. It is important that we expose their wicked and cowardly lying, and their overarching goal of dominating the poor masses of the third world for their imperialist masters. However, we must not make the mistake of condescending or attacking the majority of people of faith. We must aim to unite the masses of the third world, and educate them on how to identify and fight these imperialist mercenary charlatans. We must show the religious masses that regardless of their faith, they have more in common with each other than they do differences. We need to ensure that all people can contribute to the struggle. This includes secular forces as well as religious peers, priests, imams, monks, and holy men. All must be won over to Leading Light Communism. Those with an understanding of religious ideas are able to reach the people in a unique way, and are indispensable as comrades in our movement. We must not underestimate the ability of those with a solid understanding of religion and genuine love of the people to be able to communicate with the masses in a language they can understand. While we must maintain secularism as an organization, we still must unite all who can be united, and lead all who can be led. At the same time we must expose the wicked deceptions of the imperialists and their cowardly butcher-agents who seek to manipulate religious differences in service to Empire. It is the responsibility of Leading Lights to guide the way.