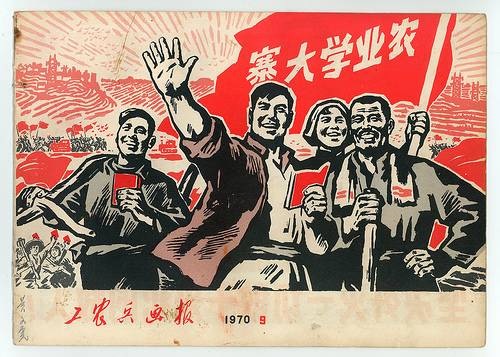 On healthcare and barefoot doctors

The following is an mainstream, bourgeois article from National Public Radio on socialist China’s barefoot doctors. The barefoot doctors were part of socialist China’s alternative approach to medicine. The program sought to provide basic health care to the Chinese masses. Under previous regimes, the vast majority in China had little access to health care. Because of programs and campaigns such as this one, China’s life expectancy doubled while the Communists were in power from 1949 to the 1970s. However, socialism in China was reversed in the 1970s. Today, China is thoroughly capitalist. And, its masses have suffered as a result. Nonetheless, it is important to learn for the successes and failures of past revolutionary movements.

When doctors and money are in short in supply, how does a government provide health care for its people? Brenda Wilson has reported that at a time when they’re needed most, physicians and nurses from developing countries are being recruited away in large numbers by Western countries. This shortage — for example, one doctor for every 10,000 people in Kenya — is complicating the fight against AIDS and other diseases.

On the eve of the 1949 Communist Revolution, China found itself in a situation similar to that faced by African countries today. China had estimated that there were about 40,000 physicians trained in Western and Soviet medicine in the country, serving a population of 540 million people. Worse yet, most of these physicians worked in large cities; 80 percent of the population were rural peasants.

‘Big Belly’ and the Communist Party

Ten million of these peasants suffered from “big belly” — the peasant name for schistosomiasis. The disease is caused by a worm living in snails found in swamps and rivers. Peasants catch the parasite while wading in water; once inside the body, the worm mates in blood vessels, and released eggs travel throughout the body, particularly to the intestines, bladder and liver. It’s the body’s immune reaction that causes the disease’s symptoms, such as seizures and the characteristic swollen belly. Chronic cases risk permanent damage to organs such as the liver, intestines and lungs.

A major platform of the Communist Party was a revolution in agriculture. A “Great Leap Forward” was needed in China. But Party leaders, including Chairman Mao Zedong, knew that improving the health of peasants was integral to increasing agricultural production.

What followed was a backlash against Western-style “elite” medicine. The “bourgeois” policies of “self-interested” physicians who only treated rare and difficult diseases were denounced as “disregarding the masses.”

One of the Party’s first steps in medical reform called for massive campaigns against infectious disease. Thousands of workers were trained and sent out into the countryside to examine and treat peasants, and organize sanitation campaigns.

Health teams claimed to have examined 2.8 million peasants in 1958, the first year of the schistosomiasis program. (One team claimed examining 1,200 patients in a single day.) Some 67 million latrines were reportedly built or repaired, and over the next few years, hundreds of thousands of peasants were set to work day and night, drying out swamps and building drainage ditches to get rid of the snail’s habitat. Party workers claimed schistosomiasis cure rates of 85 to 95 percent in some areas, and that the disease had been wiped out in more than half of previously endemic areas along the Yangtze River.

Chairman Mao was impressed, and the Party became fond of declaring that it could “cure what the powers above have failed to do.”

But Mao’s revolution was struggling, and in 1965, with his launch of the Cultural Revolution, he expanded the idea of health for the masses beyond infectious disease. Mao ordered, “In health and medical work, put the stress on rural areas.” With that, China’s cadre of “barefoot doctors” was born.

Thousands of peasants — men and women who were mostly in their 20s and already had some general education — were selected for an intensive three- to six-month course in medical training. They were instructed in anatomy, bacteriology, diagnosing disease, acupuncture, prescribing traditional and Western medicines, birth control and maternal and infant care.

The barefoot doctors continued their farming work in the commune fields, working alongside their comrades. Their proximity also made them readily available to help those in need. They provided basic health care: first aid, immunizations against diseases such as diphtheria, whooping cough and measles, and health education. They taught hygiene as basic as washing hands before eating and after using latrines. Illnesses beyond their training, the barefoot doctors referred on to physicians at commune health centers.

Ten years after the Cultural Revolution, there were an estimated 1 million barefoot doctors in China. Looking back, however, gauging the program’s success is complicated.

A Model for Rural Health Care?

In the 1970s, the World Health Organization and leaders in some developing countries — even the Soviet Union — began to consider China’s program as an alternate model to Western-style health care. They were looking for inexpensive ways to deliver health care to rural populations; China had seemed to set up a successful model.

But the barefoot doctors program largely fell apart in the 1980s and ’90s: The central government provided less financial support for the program, and the country’s emerging free-market system began forcing farmers to pay for their health care. The World Health Organization recently ranked China as fourth-worst out of 190 countries for equality of health care. Yet 40 years after the program began, the program still holds allure, and lessons, for health officials around the world looking for a solution for inadequate rural health care.

Some of the claims made about the program’s successes weren’t always backed up by data. On a visit in 1972, American doctor Victor Sidel admitted it was hard to measure the quality of the program. Nonetheless, Sidel praised it for supplying health care where previously there had been none; he also singled out the barefoot doctors themselves for their role as patient advocates.

There is also agreement outside of China that the country did go much further than other countries of comparable wealth in reducing infectious diseases, such as polio, smallpox and schistosomiasis, writes historian John Farley in his book, “Bilharzia: A History of Tropical Medicine.”

Farley also relates the observations of Dr. Paul Bausch, of Stanford University, who made a visit to China in 1984. Bausch reported back that there indeed had been a 90 percent reduction of schistosomiasis in some regions. Overall, according to Bausch, cases were down from 10 million people 30 years earlier to 2.4 million, with most cases being mild.

The barefoot doctors, and their predecessors, had in fact, as the Communist Party claimed, turned “snail-infected swamps into ‘rivers of happiness.’”