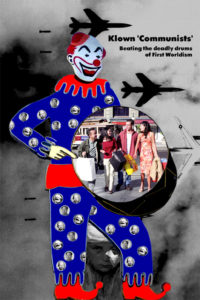 You can think of the ideology of First Worldism in very simple terms. It’s a simple lie: that the whole world can live at the rich standards of First Worlders, and that the Third World should forget class struggle and by other means reach out for this bogus brass ring.

The only grain of truth in this lie, the grain of truth which sells the lie itself, is that First Worlders do indeed live richly. All First Worlders are of course part of the world’s richest 15%. Most Amerikkkans, for example, are part of the world’s richest 10%. (We won’t even trouble ourselves to provide documentation of these claims here. We’ve documented these particular claims over and over again. Our First Worldist critics have never once challenged that documentation – of course they can’t – so we’ll just consider our claims of First World population wealth as established and agreed upon fact.)

The ideological swindle of  First Worldism is aimed at turning the proletariat away from class struggle against their First World exploiters and toward some vague “technological” solution to Third World impoverishment, with the parasite We$t, of course, always at the ready to lend their imperialist “expertise.” It’s the same old lie that the bourgeoisie has always peddled to the proletariat: just act right, and you can someday live like us. Same old lie, global scale.

Imperialism works overtime to crush the international proletariat militarily and economically. But the imperial We$t has plenty of stolen resorces left over to devote to ideological war against the Third World. Take First World cultural imperialism. Which has as its main aim the dissemination of the deadly ideology of First Worldism to the international proletariat. Each First World movie, magazine, pop song, burger or T-shirt parades the riches of First Worlders before the Third World masses in hopes of duping them into First Worldism and detouring them from class struggle. Detouring them to defeat and death.

And, for the more politically advanced in the Third World, imperialism has the ideological weapon of fake, klown “communism” to push First Worldism to potential proletarian leaders. These klown “communists” routinely adorn themselves with the nominal symbols of genuine communism. They sport Marx or Lenin or Mao in their costume declarations. They even call themselves Marxists, or Leninists, or Maoists, or communists.

But they’re relentless in denying that the world’s richest people (the First World populations) got those riches through exploitation. That denies the most fundamental truth of Marxism, it denies class struggle, it’s First Worldism.

So whatever their political costume, these “communists” are in fact First Worldist klowns.

The Third World will only win through genuine communism. Today, that’s Leading Light Communism. Today, it’s either klown “communist” First Worldism or L. Some organizations and individuals may appear “undecided” or “ambivalent” in this choice. Such organizations and individuals are sometimes called “fence sitters.” That’s a misnomer. There’s no fucking fence.

* This article was originally published in March 3, 2010 by Leading Light Shubel Morgan. We have reproduced his work here with slight edits.