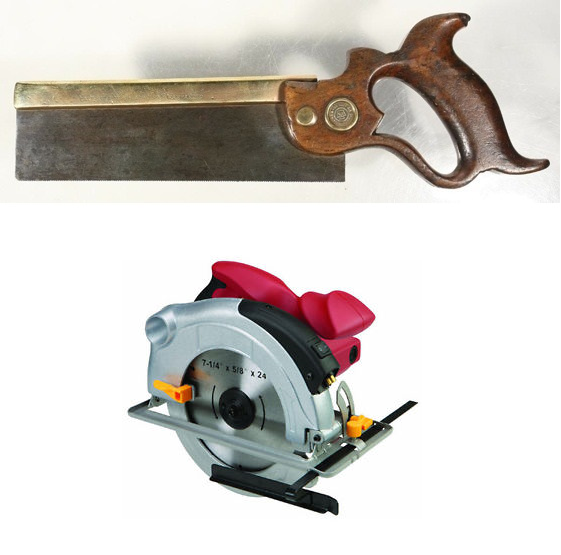 Humans are fundamentally a tool-using species. The development of rudimentary tools by our ancestors played a tremendous role in our collective evolution as humanity. The creation of crude tools and the creation of fire played a tremendous role in placing humans in a powerful role in the ecosystem and laid the foundations for the advancement of our species from our humble origins into massive civilizations. In pre-agricultural hunter-gatherer society, the creation of crude tools—rudimentary stone tools, flint stone, wooden spears, and axes—served well enough for our social and economic needs. As human society developed and became more advanced with the advent of agriculture, there was a need for more complex tools. Humans developed primitive metallurgy to construct farming tools including plows, hoes and scythes for the fields. As the agricultural revolution spread through the world, along with it developed the concept of property relations (private ownership of land and tools), and along with that, the necessary social developments to enforce these relations, e.g., patriarchy, socioeconomic classes, and government. As the conditions facing human society have developed, the need for more complex tools has developed, driving technological, social and economic development in every sphere. While a stone axe was an adequate tool during the neolithic era, it would have served inadequately for the needs of a bronze age agricultural society. Likewise, ancient bronze and iron farming equipment would be inadequate for today’s farmers compared to modern mechanized agricultural tools and vehicles.

A scientific theory, at its core, is a tool: an instrument of language and thought which is used to provide predictive and explanatory power about the universe and the world we live in today. Like any other tool, science evolves and develops constantly. A scientific theory should not be thought of as an absolute truth, but rather, as the best tool available at the time for understanding, predicting, and explaining phenomena. A bronze plow may seem primitive compared to the mechanized agricultural machinery of today, but in its time, the farmer with a bronze plow had a tremendous advantage over the farmer without one. That being said, it would be unreasonable for a farmer to choose a bronze or iron age plow over a modern tractor, and likewise, it would be unreasonable for a scientist to substitute modern scientific knowledge for the scientific knowledge of 500, 1000 or 2000 years ago. Imagine for instance that a loved one was to suffer a terrible accident, and was rushed to a hospital. As they’re being prepared for surgery, a doctor tells you that this hospital’s surgeons have rejected modern medical science, and instead are using instruments and medical knowledge from the 1850s. Would you be fine with this? If you were to hire a teacher for your child for geography lessons, would you be fine with the tutor teaching your child geography from the year 1917? If you were to enroll in university to study computer science, would you be fine if you found out the university teaches the ancient computer science of 1966 rather than today’s?

Of course, most rational people would answer “No!” and demand that modern techniques and science be used instead. Why is it, then, that so many self-identifying communists are still proclaiming the dinosaur ideologies of the 19th and 20th centuries to be the best theories, the best tools in revolutionary science available today, when the world has changed so drastically since their inception? It is mind boggling that so many people are caught up in the ancient past. If we want to build revolution today, if we want to go all the way to Communism, it is necessary for us to grasp more advanced tools—the most advanced tools available. It is not a solution to attempt to simply rebuild the past. If Leninism was enough to reach the final victory, then why did Leninism eventually fail in the Soviet Union? If Maoism was enough to reach the final victory, then how was it not successful in the end under the leadership of Mao Zedong himself? Look how much the world has changed since the last revolutions. During the time of Mao Zedong, the majority of the world lived as peasants in the countryside within a semi-feudal society. Medical science was so ancient that lobotomies were seen as a cure for melancholy behavior, smoking was seen by many physicians as good for the heart and lungs, television was a luxury enjoyed only by a small minority of humanity, and personal computers and the technology of our modern day was beyond the wildest dreams of most scientists. Thomas Watson, President of the International Business Machines Corporation, remarked in 1943 that in the future, there would be a market for “Maybe 5 computers” in the world [1]. The world has changed in drastic ways in the last 5 or 6 decades. We live in a very different world, with very different conditions and challenges than those faced by the Chinese Maoists, let alone Lenin and Marx. The Leading Lights of the 19th and 20th centuries were not magicians who could see the future. Marxism is not a crystal ball and Marx, Lenin, and Mao were no wizards. By no fault of their own, they were not able to fully predict and understand what conditions would be like decades after their deaths. For this reason, we should not have fantasies about merely cobbling together the ruined fragments of past revolutions, of past socialist societies. It is necessary to go much further in new, brilliant and creative ways. We must remember the past, we must study and learn from the past, but we cannot achieve victory for the global proletariat by simply emulating the past. The science of oppression has moved forward, and so must the science of revolution, the science of human liberation.

Thankfully, we have revolutionary science to guide our way forward, the “spiritual atom bomb” of the oppressed and exploited. We have the ability to analyze history and the present using historical materialism to examine how the existing political and class structures have developed over time, and to see how we can be effective in making revolution succeed. The aim of Leading Light Communism is to provide the latest, most advanced political theory that will allow the global proletariat to wash away the old world of colonialism, exploitation, poverty, hunger, rape, and oppression in a glorious wave of revolutionary fire and create a beautiful new world fit for the existence of all people. We wage our struggle because we know that all of humanity, our children and grandchildren, should have a better world.