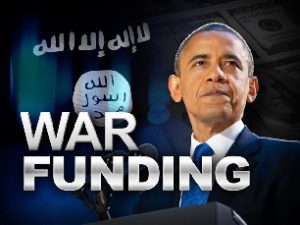 On Wednesday, US President Obama opened the door to “limited” ground operations against the so-called “Islamic State” (ISIS, ISIL, IS) by proposing a resolution to the US Congress authorizing a limited actions. According to a statement by Obama, the resolution does not authorize new troops for another war in the Middle East, but it authorizes activities by those current troops stationed in the region against the Islamic State for three years. Obama proclaimed that the Islamic State “will lose.”

We should look with great skepticism on Obama’s three-year time table, considering that the United States has been actively fighting Iraq since 1990. In reality, the United State has been involved in a continuous war against Iraq since the first Gulf War began in August, 1990 to February, 1991 followed by a decade-long air war. This was accompanied by a war against Iraq’s infrastructure, over a decade of strict sanctions to punish and weaken Iraq. This was followed by the invasion and occupation of Iraq that began in 2003. This war was declared over in 2011, but continues to this day. Now the United States seeks to increase its involvement in Iraq again under the pretext of fighting the Islamic State. Thus the recent declaration by Obama changes very little. It merely seek legitimation for continued imperialist policies against Iraq.

The latest move by the Obama administration reflects the hypocrisy of Empire. Empire sought to use the Arab Spring movements to create a Middle East more friendly to themselves. Empire actively encouraged the destabilization, later to be followed by a clandestine NATO invasion, that toppled the Gaddafi regime in Libya. Empire sought the same in Iran in 2009, but failed. Although, perhaps as a result, Ahmadinejad was replaced in 2013 by those less hostile to the United States. Protests against Assad’s regime in Syria turned to civil war in 2011 with Empire supplying massive funds, weapons, and training for numerous sectarian, Sunni opposition groups and foreign fighters. Although the Western media maintained the myth that there was a viable liberal, moderate “Free Syrian Army,” it quickly became apparent that the extremists were the only capable fighting force opposed to the Assad regime. These extremist groups followed the tactic pioneered by Al Qaeda in Iraq. They sought to bring themselves to power on the back of a sectarian conflict between Sunnis versus Shia. Thus the Syrian conflict became part of a wider regional power struggle between Shia Iran and the Sunni Gulf states, Israel, their allies, and other imperialist states. Thus Empire and its allies began funneling massive support to the Islamic State and similar groups in their effort to undermine the Assad regime and Iranian influence. Soon, the Islamic State had not only filled a power vacuum in northern Syria, but also Iraq. The result was a barbaric, nightmare regime that broadcast its atrocities on youtube: beheadings of prisoners, crucifixions, stoning of women, throwing gays off buildings, murdering minorities, public markets where girls – trophies of war – are sold as sex slaves. Most recently, in violation of Islamic law, the Islamic State burned a Jordanian pilot alive on youtube. Surely, bomber pilots themselves burn whole towns and villages with their bombs, they are not innocent. However, burning people alive on film only creates a spectacle of terror. So much for hearts and minds. The Islamic State is one of the few insurgencies that has been successful putting little emphasis on mass line. How can an insurgency get so far while caring so little for those it rules over?

The Islamic State is a Frankenstein creation of Empire that will not bring liberation. It will only bring ruin. It is part of a divide and conquer strategy by Empire against the peoples of the Middle East. Empire created the conditions for the rise of the monster — a quarter century of aggression that has left Iraq in ruins, killing millions. Empire created the conditions that have killed hundreds of thousands in Syria. Empire has a direct hand in creating the monster through funding, training, and weapons, especially through the Gulf states, Israel, and Turkey. However, now the Frankenstein is too big now. So, Empire is now reigning in its monster. Empire will beat the monster into submission through bombings and ground operations. And, in the end, the Hezbollah-Assad-Iran-Iraq axis will be weaker. The Sunni and Shia populations will be devastated in Iraq and Syria. The people of the region will be beaten into submission. The populations will be more divided than ever along ethnic and sectarian lines. And Empire will be able to justify its continued occupation. And the bourgeois media will proclaim Empire the hero for saving the Arab peoples from the monster. This is part of a new pattern of crisis politics where Empire creates a crisis, then Empire uses the crisis to justify its intervention. Then Empire puts itself forward as the only sensible alternative. With one hand, Empire starts the fire. With the other hand, Empire puts out the fire. And the capitalist media claps with both hands for the imperial heroes. The Islamic State is not a genuine anti-imperialist force even though it appears to be in conflict with Empire. At a deeper level, it is serving Empire’s purpose of weakening the ability of Third World people to resist, discrediting real resistance to Empire that might arise, and it plays the villain that allows Empire to play the hero. Empire is literally playing multiple sides of the conflict in order to weaken the entire region. Empire is pulling the strings of the Islamic State.