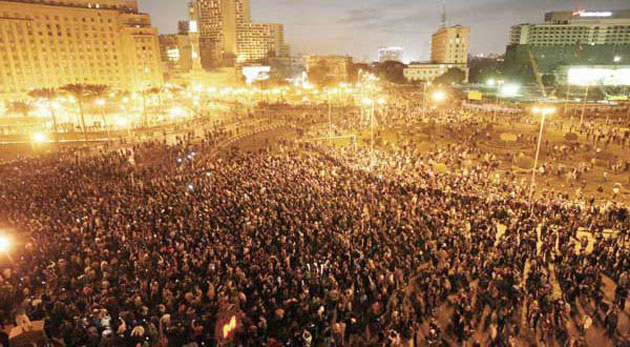 Notes on Protest and People’s War

Over the past few years we have seen numerous regimes shaken and many toppled throughout the world. Those deemed the “Arab Spring” have been the most dramatic. movements should make us rethink our own strategies for seizing power. The revolutionary movement had written off insurrection as dated, recent events demand that we take another look. Should we continue to focus on traditional, protracted people’s war? Should we shift away from protracted people’s war to insurrection? Should we combine elements of both?

The first sustained socialist revolution, the Bolshevik revolution led by Lenin, was propelled to power by an insurrection. The Bolsheviks seized key cities in a series of urban uprisings. They seized the key, major cities where industrial power and political power were concentrated. Here is a timeline of the “Red October” (November in the New Style calendar) uprisings:

Of all the uprisings of the past years, the Arab Spring, Greece, etc., none have led to a real revolutionary transformation of society. The uprisings have toppled regimes, forced resignations, etc. However, the social transformation is very superficial. What is it about the insurrections or protests of recent times that have so failed at revolutionary transformation? The key difference between the Bolshevik experience and more recent uprisings is leadership. A real revolution is not merely toppling a government, or forcing resignations. It is possible to put mass pressure on a government so that it resigns, the void left however will simply be filled by some other force. The institutions of the old state and society will be left untouched. They will simply be manned by a new regime. The old institutions were constructed as instruments to oppress the poor. The bureaucracies of the old society are tools for oppressing the poor. They cannot simply be seized and used for the opposite purpose. They must be dismantled, smashed. If they continue to exist, the insurrection can only lead to, at most, cosmetic changes. Revolution is not merely a change in government, it is a transformation of society at the deepest levels. This is why what has happened recently in Egypt is not a real revolution while what happened in Russia in 1917 was. The revolutionary forces must be able to have alternative institutions ready to take the place of the old state. They must have New Power ready to replace Old Power. Without New Power, the Old Power simply remains albeit with superficial changes. In order to build and direct New Power in the revolutionary situation, to coordinate the revolutionary institutions with each other and the masses, there must be a leadership organization, a vanguard. This role has traditionally be filled by the Communist Party, which functions as a kind of brain and nervous system, connecting all parts of the revolutionary body. The brain gets the body to work together according to a plan. In order for the revolutionary process to go forward smoothly, it is important that the leadership is itself led by the best plan available, the most advanced revolutionary science. Today, the most advanced revolutionary science is Leading Light Communism.

Recent events have shown the potential for mass uprisings to paralyze and bring down governments. We should not be so dogmatic as to refuse to incorporate these recent tactics into our people’s wars when possible. have never limited ourselves to orthodoxy, Maoist or otherwise. What is key is the construction of New Power under leadership of the Leading Light. We must understand the importance of putting the most advanced revolutionary science in command. Protracted people’s war as a method allows New Power to mature over decades. The protracted nature creates a bond between the poor and the revolutionary cadre. We should not loose this merely in order to quickly replace one bourgeois regime for another. We must construct New Power over a protracted period, creating trust with the masses. When we are ready, when our power is great enough, we can potentially use a mass protest combined with armed struggle to bring up our New Power. However, this should be conceived as the culmination of a much longer process, a protracted people’s war that creates a shadow state, a dual power, a New Power. No doubt there will be many confrontations with the Old State prior to any insurrection. We should not straightjacket ourselves to any single strategy in all situations. We must examine the situation in each case to see what strategies are appropriate.

Globally, our strategy is global people’s war from the Exploited World to the Exploiter World: global people’s army, global New Power, global red zones, etc. However, there are new trends that lead to reevaluation of the localized struggle in any given country or large geographic area. Demographic shifts have led to a situation where for the first time in history, the majority of the world’s people now live in urban, not rural areas. The fastest growing demographic is the slum dweller of the Third World megacity. These trends do not seem to be slowing. The slum dweller is the proletarian of the future. It is from the slums that significant New Power will emerge, often outpacing New Power in the countryside. The red zones of the future will be in the slums of megacities of the Third World. These will be our base areas. It is likely that our protracted people’s war will not be as one directional as the Maoist model. In some places, our war will move from the countryside to the city. In others, our war will move from the slums to the countryside to the urban centers. The key is the continual expansion of New Power; the continual expansion of the influence of the Leading Light. We must be flexible, creative, and bold. We are Leading Lights, not dogmatists. The future is ours.