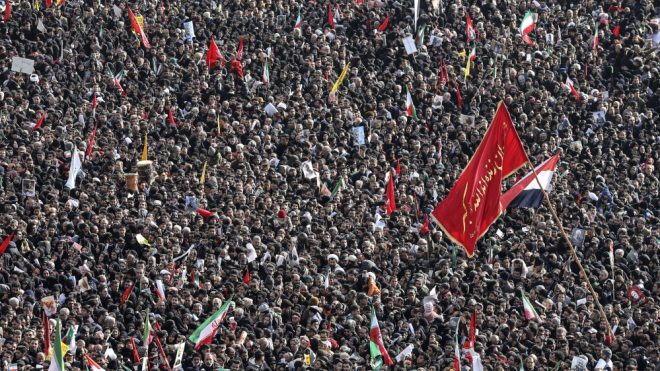 No to War on Iran!

On January 3, 2020, Iranian Major General Qassem Soleimani and 9 others were killed in a U.S. airstrike at the Baghdad International Airport. Under the UN Charter, the assassination of Soleimani is illegal and in clear violation of international law. It is clear that the unilateral decision to target the General is a provocation against Iran that is tantamount to an act of war.

Unsurprisingly, U.S. mainstream media is making attempts to portray the attack as an act of “self-defense” while demonizing Soleimani as “the no. 1 most evil man on the planet” who is “responsible for the deaths of thousands of Americans.” Of course, this completely ignores the fact that the U.S. has been trying to provoke Iran since 1979, or that Soleimani was instrumental in assisting Syria, as well as Lebanon, Iraq, and Yemen, in defeating the terrorists of ISIS and Al Qaeda, both U.S.-backed proxy forces. This targeted assassination is not the first time that the United States has blatantly violated international law with impunity. If anything, it has further exacerbated the already mounting U.S. hostilities towards Iran as Washington has continued to impose sanctions, wage propaganda wars, and rely on CIA covert operations in several attempts to destabilize the country. These most recent provocations follow the U.S. unilateral withdrawal from the Joint Comprehensive Plan of Action nuclear deal, an agreement in which, by all accounts, Iran was honoring its part.

It is highly understandable that the people of Iran are demanding long overdue justice and retribution as they continue to struggle against U.S. imperialism. In fact, just two days after the assassination, it was announced that Iran had raised the blood-red “flag of revenge” in the city of Qom as thousands of Iranians continue to mourn the death of Soleimani.

While Iran has demonstrated its resolve to defend itself by launching pinpoint missile attacks against two military bases in Iraq where U.S. troops are stationed, showcasing its advanced ballistic missile capabilities but avoiding widespread American casualties, it appears that the United States has backed off from launching a full-scale attack against Iran, at least for now, opting instead for increased sanctions against the country (if Trump’s words are to be believed). However, the U.S. maintains numerous strike aircraft in the region, including F-22s and F-35s as well as six B-52 heavy bombers which were recently deployed to the U.S. base at Diego Garcia in the Indian Ocean. Tensions between the U.S. and Iran remain high, and it is still possible a war could break out with the potential to spread across the entire Middle East region.

We cannot stress enough that it is our duty as communists to take a principled stance against imperialism and acknowledge Iran’s right as a sovereign nation to defend itself by any means necessary. A more sophisticated understanding of U.S. foreign policy is needed in a revitalized, grassroots anti-war movement in the imperialist nations. This is also a reminder that imperialist wars of aggression are never truly about fighting for “democracy” or “human rights” in targeted nations because, at their core, these wars have always been about the international exercise of domination through the economic plundering of oppressed nations. As the empire relies on a divide-and-conquer strategy to maintain its global dominance, it is thus essential for peace-loving people everywhere to uphold a strong united front against U.S. imperialism. Workers across the world must unite based on common class interests in order to defeat capitalism and imperialism and establish a just, egalitarian, and sustainable world under socialism where peace and global disarmament can truly be achieved.