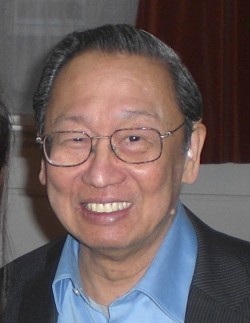 In a recent statement entitled “Support coordinated actions to demand the bail out of the American People, not the bankers,” Jose Maria Sison kisses American ass. (1) The “Communist Party of the Philippines” demonstrates, once again, that it is led by a First Worldist revisionist, not a proletarian internationalist. Sison consistently advocates for First World populations at the expense of Third World populations. Sison consistently allies himself with social-fascist parties in the First World against the Third World.

In this statement, Sison laments that there was a bailout for the “finance oligarchy,” but “there is no bailout money for the American people who are the real creators of wealth and who have long fleeced by the monopoly bourgeoisie and its imperialist state.” Sison also states, “The bailout money poured into the financial banking sector does not flow into the money stream available to the working classes and the people nor to the real economy.”

1. American people are not the main creators of their wealth. In fact, very few are employed in the productive sector at all, “the real economy.” Americans are, in the main, employed in the white collar, service and distribution, and public sectors. Americans are employed realizing value that has been created elsewhere. The vast majority of American wealth has come to Americans through imperialist mechanisms. The very land that Americans build their houses on was plundered from hundreds of indigenous nations. The wealth that allows Americans to buy such luxurious homes originates in exploitation of the Third World. America is the most thoroughly bourgeoisified nation in the world. Virtually all sectors of American society benefit by aligning with the monopoly bourgeoisie and its imperialist state against the Third World. By obscuring this point, Sison promulgates the racist, settler, imperialist myth that Americans deserve the land that they occupy and the wealth that they stole.

In abandoning proletarian political economy, Sison implicitly embraces the Theory of Productive Forces. If wealth is not generated by human labor, then technology is the main factor as such an argument implies. Sison’s line directly contradicts the Maoist line of the Four Firsts policy that the human element is principal over the technological. Sison’s argument implies the wealth of Americans is a product of their technology, hence the enormous wealth of the First World belongs to First World populations, whereas Marxists recognize that wealth is created by productive labor.  Since Americans barely do any productive labor, the source of their wealth lies elsewhere, the Third World.  This wealth is stolen by imperialist mechanisms in order to maintain the American way of life. The Theory of Productive Forces was exposed by Maoists during the Cultural Revolution as the revisionist theory par excellence.

2. Sison complains that nothing will be done to “rescue or help the ordinary American people, including the American working class, and now the impoverished middle class, from the rigors of industrial decline, rising unemployment, unpaid debts, mortgage foreclosures and the aggravating conditions of recession which can no longer be hidden by debt financing.”

The majority of the world’s population in the Third World exists in a permanent state of crisis. The majority in the Third World exist in a state of catastrophic poverty created by imperialism. They exist  on the edge of annihilation.  Americans, even the poorest segments of the American “working class,” are some of the wealthiest people in the world; they fall around the richest 10-13%. In other words, the American “working class,” are richer than around 90% of the world’s population. There is no meaningful sense in which the American “working class” constitute an exploited class, a proletariat, a revolutionary class. They may earn a wage or be salaried, but that is where the commonality ends between American “workers” and Filipino workers. What kind of communist advocates for the richest people in the world? Sison sells out his own people in order to make the rich richer.

3. Sison says that he supports the mass movement against the bailout. What mass movement is Sison talking about? A mass movement against bankers does not exist in the United States, unless Sison is talking about Obama rallies. Sison’s politics, in the immediate term, tail the Democratic Party. In the long term,  Sison is  fanning the flames of fascism, social fascism in particular. Sison is greatly misleading his readers in the Philippines about the true status of the revolutionary movement of the First World. Those who talk about “mass line” in the First World are full of hot air. There is, generally, no mass line in the First World because there are no masses. Sison is serving up the Filipino people to the imperialists.

Sison has a level of prestige because of his past involvement in people’s war. Today, Sison is a mover and shaker, a First Worldist, revisionist scenester. Sison makes himself available as a tool, as a mascot, to First Worldist organizations. Sison and his First-World allies are arch-opportunists. Sison’s main visible political activity, based in the First World, is directed against the revolutionary movement. Sison uses his prestige to betray the revolution by promulgating of the new, modern revisionism: First Worldism. He sells out the Third World to the First World.

The International Communist Movement is at a turning point. The impotent ripples of revisionism represented by First Worldist “umbrella” organizations like the RIM and ICMLPO has done nothing to restart the next wave of communist revolution, save to discredit the reputation of communism in the eyes of the masses.  The parties that have most closely been identified with “Maoism” globally have exposed themselves as thoroughly revisionist. These organizations are intellectually dead. As a brand, “Maoism” has been so sullied as to make it next to useless even by the revisionists who have created this situation. This is the kind turning point represented by Lenin’s confrontation with the social chauvinists of the Second International or Mao’s confrontation with the Soviet social-imperialists. Leading Light Communists are confronting the revisionists of our age.  Do you stand with the Leading Light Communists, the ideological vanguard, with the vast majority in the Third World?  Or, do you stand with Sison, the Americans, the First World?

Get off the fence!