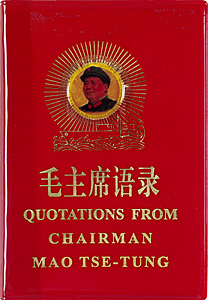 Mao criticized and mocked those who had a metaphysical, dogmatic approach to books and knowledge:

“Whatever is written in a book is right — such is still the mentality of culturally backward Chinese peasants. Strangely enough, within the Communist Party there are also people who always say in a discussion, “Show me where it’s written in the book.””

Our’s is a very rich tradition. The most important revolutionary works are those of Karl Marx, Friedrich Engels, Vladimir Lenin, Mao Zedong, Lin Biao, and the new Leading Light. Anyone who seriously claims to be a revolutionary must have some familiarity with these works. Because of the richness of this literature, it is easy to fall into book worship. There are those who act as though whether or not a claim is true depends on whether it can be found in the revolutionary classics. This kind of metaphysical attitude toward the classics should be opposed. Whether or not an assertion or theory is correct depends on how well that it predicts and explains the world. In other words, reality, not tradition, is the ultimate judge. This is an important, fundamental part of materialist epistemology.

We should avoid getting into wars over scripture. We should not quote monger. We should not fetishize the classics. Ultimately, it does not matter who can produce more quotes from the classics in support of their position. Those elements of the classics that help us predict and explain our world should be developed and expanded, incorporated into our science. If helpful, those passages should be referenced. We should not be afraid of rejecting the classics where they are wrong. Marxism is not religion. The classics should not be regarded as the Holy Bible. We are scientists, not monks.

Science evolves. Just as Albert Einstein built on of Isaac Newton, Lenin built on the works of Marx. Mao built on the works of Lenin. Leading Light Communism builds on this revolutionary history. Our work builds on this tradition, incorporating and developing those elements that apply to the world, and leaving behind those elements that do not. We should not wrap ourselves in the orthodoxy as Maoists or Hoxhaists or Trotskyists do. Our authority is grounded in the truth of our science, not whether or not it reproduces an orthodoxy.