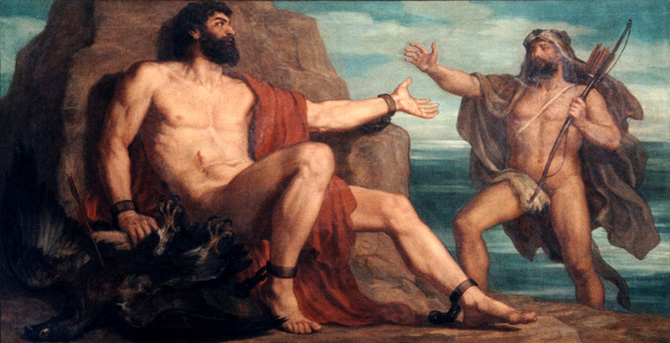 In Greek Mythology, there is a story about how humanity received fire. The Titan Prometheus stole fire from the gods to give it to humans. Prometheus went the home of the gods on Mt. Olympus with a stalk of fennel, and inside it hid a spark from one of the thunderbolts of Zeus, the king of the gods. The Titan quietly departed Mt. Olympus and gave the smoldering stalk of fennel to humanity, so that humanity could free themselves from the tyranny of the gods that ruled over them. Infuriated at Prometheus’ solidarity with humanity against their cruel reign, the gods punished Prometheus:

“Here is Prometheus, the rebel:

Nail him to the rock, secure him on this towering summit

Fast in the unyielding grip of adamantine chains.

It was your treasure that he stole, the flowery splendour

Of all-fashioning fire, and gave to men – an offence

Intolerable to the gods, for which he now must suffer.” (1)

The myth tells how Zeus, the king of the Gods, would send an eagle to eat Prometheus’ liver. Being an immortal Titan, his liver would grow back every night. Day after day, the eagle would return to torment Prometheus by eating his liver yet again. However, Prometheus was successful, and humanity began to free itself from the rule of the gods. Much later, a child of Zeus and a mortal human by the name of Heracles would come to free Prometheus and kill the eagle tormentor.

In the 1901 pamphlet “What Is To Be Done?”, Lenin points out the need to bring the science of revolution out of the bourgeois academy and to the proletariat through professional vanguard communist party. (2) Antonio Gramsci points out in his “Prison Notebooks” how the communist party is like Niccolò Machiavelli’s “Prince” but with a Jacobin rather than a conservative character. This Jacobin Prince enables the proletariat to replace the cultural hegemony of the bourgeoisie with proletarian cultural hegemony. In discussing Machiavelli’s book “The Prince”, Gramsci writes:

“Throughout the book, Machiavelli discusses what the Prince must be like if he is to lead a people to found a new State; the argument is developed with rigorous logic, and with scientific detachment. In the conclusion, Machiavelli merges with the people, becomes the people; not, however, some “generic” people, but the people whom he, Machiavelli, has convinced by the preceding argument — the people whose consciousness and whose expression he becomes and feels himself to be, with whom he feels identified.” (3)

So-called “post-colonial” thinkers who wax poetic about “the subaltern” have attempted to divorce Gramsci’s ideas from revolutionary science (4), from Leading Light Communism. They regard any attempt to scientifically look at how the world is divided up between the Global Rich and the Global Poor (the subaltern in this case), the antagonistic social relationship of those groups, and how we can make revolution as “elitist representation” of the subaltern groups. These subjectivist narrative-obsessed “post-colonial” thinkers of today are not unlike syndicalist Georges Sorel, of which Gramsci writes:

“A study might be made of how it came about that Sorel never advanced from his conception of ideology-as-myth to an understanding of the political party, but stopped short at the idea of the trade union. It is true that for Sorel the “myth” found its fullest expression not in the trade union as organisation of a collective will, but in its practical action—sign of a collective will already operative. The highest achievement of this practical action was to have been the general strike—i.e. a “passive activity”, so to speak, of a negative and preliminary kind (it could only be given a positive character by the realisation of a common accord between the various wills involved), an activity which does not envisage an “active and constructive” phase of its own. Hence in Sorel there was a conflict of two necessities: that of the myth, and that of the critique of the myth—in that “every pre-established plan is utopian and reactionary”. The outcome was left to the intervention of the irrational, to chance (in the Bergsonian sense of “élan vital”) or to “spontaneity”.” (5)

The organic intellectuals of the Leading Light are like the mythical Heracles, as they will lead the world’s masses to defeat the old powers and free Prometheus from his capture and torment. This is correct orientation towards developing the revolutionary communist leaders of the future. Prometheus may be a Titan who sacrificed himself to give humanity the fire of revolutionary science. However, it is Heracles who is the Hero of legend, who overcame all of his struggles with the Gods by wielding the fire of revolutionary science.