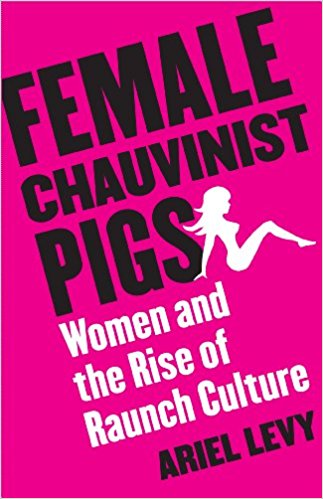 Ariel Levy’s Female Chauvinist Pigs documents the rise of what she calls “raunch culture” and the roles that women in the United States play in that culture. The book documents something very real. However, it is not just a sociological report. It is also a polemic of sorts against the now popular camp of bourgeois feminists known as “sex-positive feminism.” The book is a return to the second wave bourgeois feminism. Levy has more in common with a Catherine Mackinnon or Andrea Dworkin than her sex-positive contemporaries. The book represents one kind of bourgeois feminism arguing against another. The book never overcomes the limits of bourgeois thought and bourgeois conceptions of gender. The book does not cover how its topic intersects with global class and imperialism. Instead of following the data on raunch culture to the correct conclusion that women in the Bourgeois “First” World are overall beneficiaries of global systems of power (including patriarchy) and occupy oppressive-social roles in a way similar to their male counterparts, Levy dogmatically implies that Bourgeois World women are all oppressed victims of patriarchy. She sees all women, in the Bourgeois World and Proletarian “Third” World, as part of a great sisterhood. Why do women in the United States partake in raunch? Levy’s answer is that Bourgeois World women suffer from a kind of false consciousness. Levy implies that the reason that there is no revolutionary feminist movement in the United States is because women don’t understand that they are oppressed. While it may be true Bourgeois World women suffer from various forms of false consciousness, the reason that they do not pursue their supposed gender interests by joining the revolutionary struggle is not due to lack of education. It is because their gender interests and other interests, in important ways, stand in opposition to the goals of real revolution. In other words, what Levy fails to fully understand is that women in the Bourgeois World support the system because they benefit from it in important ways. Women in the Bourgeois World do not seek to abolish gender oppression globally because they have an interest in maintaining it.

Levy gives many examples of the pornified and mass-media-driven raunch culture. Examples range from Playboy, “Girls Gone Wild,” the stripper and porn-star craze, Sex in the City, Britney Spears. Raunch culture is not limited to heterosexual males. Female Chauvinist Pigs is about the queer and heterosexual women who are increasingly a part of raunch culture. Levy sums up the female chauvinist pig:

“We decided long ago that the Male Chauvinist Pig was an unenlightened rube, but the Female Chauvinist Pig (FCP) has risen to a kind of exalted status. She is post-feminist. She is funny. She gets it. She doesn’t mind the cartoonish stereotypes of female sexuality, and she doesn’t mind a cartoonishly macho response to them. The FCP asks: Why throw your boyfriend’s Playboy in a freedom trash can when you could be partying at the Mansion? Why worry about disgusting or degrading when you could be giving — or getting — a lap dance yourself? Why beat them when you can join them.” (p. 93)

Many Bourgeois World women go to great lengths to make themselves sexually appealing. They parade around in gogo boots. Some compete at clubs and parties to take off their tops or do sex acts for the camera. There are spokesmen for raunch who declare, like some “sex-positive” feminists, that these things are signs or even acts of liberation. In a culture where attractive “sexually open-minded” women are valued more than athletes and educators under most circumstances, as Levy observes, taking your top off can be an act of individual empowerment, albeit empowerment on the terms of patriarchy. Even though it is an act of empowerment, this is not empowerment as conceived by “sex-positive” feminists who Levy argues against.

Levy argues that the promotion of the raunch culture by women is an attempt to elevate themselves in a hierarchy of masculine sexuality while degrading their fellow sisters:

“So to really be like men, FCPs have to enjoy looking at those women, too. At the same time, they wouldn’t mind being looked at a little bit themselves. The task here is to simultaneously show that you are not the same as the girly-girls in the videos and the Victoria’s Secret cataloguers, but that you approve of men’s appreciation of them, and the possibility you too have some of that same sexy energy and underwear underneath all your aggression and wit. A passion for raunch covers all the bases.” (p. 99)

Women don’t just partake of raunch. In ever greater numbers, they have a hand in producing raunch culture. There are different roles. Some women stand above it; they engage in and consume raunch culture like men. There are different ways in which women in the United States engage with raunch. In a way, Howard Stern’s world is a microcosm of this dynamic between different kinds of female chauvinist pigs. Howard Stern’s female-sidekick Robin Quivers and her relation to the parade of porn actresses and strippers on the show is a good example. Some of these savvy, powerful “female chauvinist pigs” include those who run parts of the sex industry. Others go to strip clubs to watch the girly girls alongside the boys. They too buy Playboy products. They become “one of the boys” at workplaces by adopting male raunch culture. Levy compares these women to Uncle Toms. In some cases, they literally are the bosses in the sex industry like Christie Hefner, Hugh Hefner’s daughter. However, Levy implies, their price of admission is that they partake in the oppression of their fellow sisters who are lower in the Bourgeois World gender hierarchy.

The Uncle Tom analogy doesn’t fit exactly. Levy seems pretty clear that she thinks those at the bottom of the raunch culture hierarchy — the Hooters waitresses of the world — are oppressed and have some mistaken ideas about empowerment. Levy even mentions Gloria Steinem’s exposé, “A Bunny’s Tale,” on the trials of Playboy Bunnies. However, Levy seems to think that those women at the top of the raunch culture hierarchy are also oppressed in some sense. That she compares those female chauvinist pigs at the top to Uncle Toms is revealing. But, the Tom comparison doesn’t fit. It isn’t a case of the house slave being oppressed less than the field slave. Tom never owned the plantation, whereas Christie Hefner is running the Playboy empire. Hefner benefits in very real ways from patriarchy.

“Tomming, then, is conforming to someone else’s — someone more powerful’s — distorted notion of what you represent. In so doing, you may be getting ahead in some way — getting paid to dance in blackface in a Tom show, or gaining favor with Mas’r as Stowe’s hero did in literature — but you are simultaneously reifying the system that traps you.” (p. 106)

Levy is clearly in the bourgeois feminist camp. Levy thinks all the women who actively participate in raunch culture are suffering from a false consciousness regarding their own oppression. She is holding out for a Bourgeois World liberation from patriarchy while not overthrowing imperialism. So, she is confused when Bourgeois World women take empowerment the same way men do, on patriarchy’s terms. Like men in the Bourgeois World, women in the Bourgeois World are gender oppressors in an overall sense. Long ago Karl Marx wrote about how capitalism affected the family. Friedrich Engels wrote how marriage was mere prostitution under capitalism. It is no surprise that a traditionalism has broken down, women take on the sexual psychology and raunch culture of men.

This passage sums up Levy’s perspective:

“Even if you are a woman who achieves the ultimate and becomes like a man, you will still always be a woman. And as long as womanhood is thought of as something to escape from, something less than manhood, you will be thought less of, too.” (p. 112)