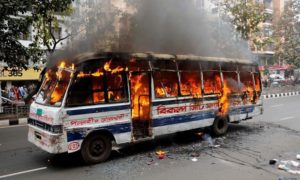 “We willed to compensate those who were oppressed on earth, and to turn them into leaders, and make them the inheritors.” [Quran 28:5]

There is a growing movement of hypocrites in our land. They pervert religion in order to attack the people. Even the Quran echoes the revolutionary demand that the oppressed become leaders of society. But there are hypocrites who are perverting religion into a tool of oppression. Do real believers set fire to a buss full of innocent workers and ordinary people, innocent Muslims? Who are these fakes, these extremists, who wrap themselves in religion while attacking the innocent? Where in the Quran does it say to light fire to innocent people, innocent Muslims?

If the Islamist extremists take power, the extremists will use their barbarous interpretation of Islam to impose a more totalitarian, dark-age regime to further enslave our people to imperialists, capitalists, and feudalists. They will twist Islam into a tool of oppression against Muslims and innocent people. If they take power, we will see the few democratic rights that exist taken from us. There will be no free speech. All dissent will be murdered. Women will be stripped of all rights. Their regime will be built on mass graves and beheadings. The future they offer is a nightmare. They are hypocrites who have no intention of preserving democratic rights. Remember that Hitler also used democracy as a way to gain power and destroy his opposition, to destroy democracy. If they are not stopped, the future for Bangladesh will look like Syria. If these jackals gain power, then it will set back the cause of the people. If the Islamist extremists gain power, it will make the struggle for human rights much more difficult, it will make the struggle for revolution more difficult. Even in the Quran itself, the oppressed have the right to fight back:

“Those who have been attacked are given permission to defend themselves because they have been unjustly oppressed. God will give them victory. ” [Quran 22:39]

The masses are attacked in all kinds of barbaric ways.  Our schools are closed by the extremist threats. Our children cannot receive a proper education. The goods of the peasants are prevented from reaching markets by the extremists. Workers cannot travel safely. Our livelihoods stolen. Our children go hungry. They steal our future. The people are beaten. The people are threatened with terror. Women are attacked. The people are burned alive on buses by these fake extremists. These attacks have been going on throughout our entire history. It is important to struggle for revolution, but it is also important to preserve the little democratic rights that do exist. The extremist hypocrites are perverting religion to turn it into a tool of oppression. They are using the name of God to take innocent lives. They are the worst oppressors, not the oppressed. We must be led by the Leading Light of truth, not barbarism.