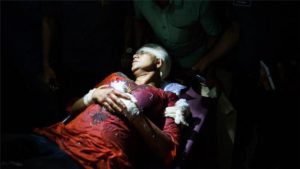 An Bangladeshi-American blogger Avijit Roy was hacked to death on February 26, 2015. He ran the Mukto-Mona (Free-mind) blog site, which championed secular, humanist values. He had received many death threats before he was killed. He was hacked to death for speaking his mind. Those who murdered him are trying to justify their crime with Islam in an attempt to destroy the religion. The Koran itself demands that we use our reason. What right does any man have to steal the gift of life from another for simply following God’s command? The Koran itself states:

“The worst creatures with God are the deaf and dumb who do not reason.” [Koran 8:22]

“It is not for a person to acknowledge except by God’s leave. He casts the affliction upon those who do not reason.” [Koran 10:100]

One of the worst sins in Islam is to attribute the qualities of God to men. Yet this is exactly what these Extremists do. They have no respect for God. Why is all-powerful God threatened by a busload of innocent people going to work? Islam says that only God can punish with fire, yet these extremists murder using all methods available, including firebombing buses of innocents? Why is all-powerful God threatened by a blogger? Who are they to say all-powerful God is so weak? God does not need their help. They are small men playing God. The Koran says that Allah should judge, not man. They have rejected the God of the Koran, the God of mercy and justice. This is the arrogance of fascism. This is the arrogance of feudal barbarism.

Embracing the best in Islam means following God’s instruction to use reason, logic, science. Everyone deserves a decent life. Everyone should know their children will have a happy future. There is no reason we have to live this way. There is a way out of the madness. Those who are truly respect God, creation, justice, peace, mercy, reason need to turn their backs on barbarism and fascism. Justice is real, our duty to justice is real. Those who are really Muslims, who truly honor the God of justice, peace, mercy, reason, follow Leading Light Communism.