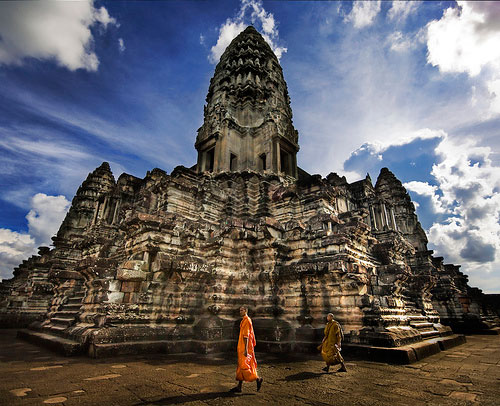 Excerpt from Malcolm Caldwell on wealth and people’s war

Malcolm Caldwell is most known for his mysterious death in 1978 while in the care of the Pol Pot regime. He was one of the few Westerners granted access to Democratic Kampuchea. Caldwell was even granted an interview with Pol Pot. However, the night following the interview, Caldwell was shot without explanation. Some have speculated the regime killed Caldwell. Others speculate that it was the Vietnamese or another anti-Pol Pot group. Other journalists touring with Caldwell were left untouched.  In 1969, roughly a decade before his strange death, Caldwell touched on some topics that are of interest to Leading Lights. Caldwell writes:

“Material abundance is not achievable on a world-wide scale, since there are important objective limitations in the way of real resources. [14] Early socialists – and even a surprising number of contemporary socialists – overlook these, and tend to imagine that, somehow, high living standards in material terms can gradually be extended from the rich classes in the rich countries to all peoples in all countries! Such is not the case. On the contrary, sooner or later living standards in the rich countries must fall.” (1)

Caldwell, by contrast, had a proto-Leading Light outlook:

“…one must say something of revolutionary prospects. Surveying the world today, it seems to me very clear that Lin Piao’s perspective conforms more closely to reality than that of traditional Trotskyism or mechanical Europocentric pseudo-Marxism. In his well known work Long Live the Victory of People’s War! Lin Piao envisages a global repetition of the drama of the Chinese revolution – that is, the isolation of the ‘urban’ (i.e. industrialised) areas of the world in a sea of rural revolution as a prelude to the collapse of the former. Now of course this must be interpreted more generously than literally. More and more, politics in the West will be the politics of reaction to events and initiatives elsewhere – in the tricontinents. This is already apparent, in marked contrast to the decades when Western initiatives shaped the entire world. [29] The crises of the imperialist powers may provoke reactive internal dissension and even civil disturbance, but the causes will ultimately have to be sought in the seething world of the peasant poor. Certainly this bears more relation to reality than the idea, noted above, of an apathetic peasant poor awaiting salvation from revolutionary (and, note, white) industrial workers! Much comfort was taken by mechanistic Marxists from the abortive French ‘revolution’ of 1968. In fact, this was the graveyard of their ideas, since the workers were readily bought off by application of blatant labourism.”(3)

Caldwell, unlike the relics with tunnel vision from the 1960s and 1970s, correctly saw Paris, 1968 for what it was: a dramatic example of how the First World working class can be blatantly bought-off. It showed how First World workers raise the red flag only to increase their bargaining position vis a vis the system, not to really make revolution.  Caldwell correctly saw that revolution is made by those who have a material interest in socialism. It is not made by those whose class interests align with imperialism. Thus, the heart of the revolution is found in the Third, not the First World. Thus the shape of revolution, the forms of resistance, will be principally drawn from the Third World, not First World experience. This is why the role of the peasantry is so important. This is why Lin Biao universalized Mao’s conception of people’s war. The proletarian revolution should be seen as a global people’s war that advances from the Third World to the First World, where the global countryside surrounds the global cities.