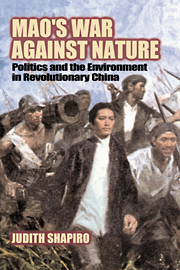 Dissent, science, and a healthy world: comments on Judith Shapiro’s Mao’s War Against Nature (2001) Part 2 of 2

Capitalism has proven itself unable of dealing with the growing environmental crisis. In order to reproduce itself, capitalism must maintain unsustainable production and consumption. It is the nature of capitalism to expand, to dominate more and more markets, to extend over greater and greater populations. This is the nature of a system based on competition. Capitalism must exploit nature and people more and more efficiently in order to maintain itself. Thus, from both an environmental and human perspective, it is more important than ever to find a viable alternative to capitalism. The future of civilization and the planet is at stake. Thus Mao’s War Against Nature (2001) by Judith Shapiro is a timely book. Shapiro lays bare the very real failures of Chinese socialism in dealing with its environment. Since socialism is the only realistic alternative to capitalism, it is necessary to study the failings of the past so that we can do better next time. Even though her book is fundamentally anti-communist, it still provides a useful service by putting the spotlight on our own failings. A true communist, a Leading Light, does not fear criticism. A true communist is guided by revolutionary science. If socialism is to work, if we are to reach Leading Light Communism, then we have to learn from our mistakes. We have to do better than the Soviet Union and China.

Shapiro sees Mao’s views as utopian, as disregarding objective limits on what can and cannot be achieved. She criticizes Maoist disregard for constraints of the natural world. In May 1958, Mao stated, “Make the high mountain bow its head;make the river yield the way.” (68) She sees the Maoists as promoting a voluntarism that disregards what is really possible in favor of utopian fantasy. This kind of thinking, she says, led the Maoists to treat the natural world as an oppositional force to be conquered and controlled:

“Elements of nature were made variously into targets of transformation, casualties in the crossfire of other battles, and targets of direct attack. In agriculture, close planting and deep plowing techniques were conscious efforts to modify the land’s capacity and force it to produce more grain. Forest destruction was primarily a byproduct of the need to fuel steel furnaces; that so much of this steel proved useless makes the deforestation more poignant. The Leap’s military-style assault on nature was the attack on China’s sparrows, which were believed to be eating too much grain. These modes of destruction are elements in the larger pattern of war.” (75)

Of course Shapiro is correct that all of this should be heavily criticized. However, this kind of attack on nature is not limited to socialism. Capitalists have treated and continue to treat nature in a similar, even worse, manner. There are widely-known examples of destruction of species. The North American buffalo was almost destroyed by the expansion of capitalism. It is only now coming back under very controlled conditions. According to a recent World Wide Fund for nature report, in the past 40 years, half of the vertebrate species on the planet have gone extinct. This mass extinction is mostly a product of capitalism, not socialism. This is not limited to animals. Hundreds of  indigenous peoples were exterminated by capitalism in North America too. Similarly, agricultural mismanagement has happened under the eyes of capitalism. Deforestation is not limited to socialism. Both socialism and capitalism have, at times, tossed scientific caution to the wind when dealing with nature. However, there is a big difference between the two. Although both socialism and capitalism have resulted in numerous environmental disasters, socialism did so in an effort to create an egalitarian world, to eliminate class, poverty, suffering, cruelty. Socialism’s crimes against nature are due to its straying from its principles of human liberation and science. By contrast, crimes against nature are a part of capitalism itself. Capitalism destroys nature not in an effort to create a just world, rather it does so to increase profit. Socialism’s errors come from the heart, the right place, capitalism’s errors come from the stomach, the wrong place. Capitalism has no capacity to change in a fundamental way since capitalism is about greater and greater profit, more expansion, more production, conquest of more markets. That is what capitalism is. Socialism has the capacity to change because it is a social system consciously organized by ourselves to put limits on ourselves. Ideally, socialism is liberation governed by the principles of true science. If the Maoists failed in this respect, it is because they failed to be Maoists in the fullest since, they failed to apply the principles of revolutionary science. They failed to be Leading Lights.

Maoists often failed to look at objective conditions when promoting economic models. The most famous of these is the Dazhai model. Dazhai was a People’s Commune where the locals rejected state aid. Instead, they relied on the spirit of self-sufficiency and cooperation to overcome adversity. They overcame natural and economic disaster to become a thriving community in an inhospitable part of China. Dazhai was elevated as a Maoist model for others to follow. Imposition of the Dazhai model, according to Shapiro, ran roughshod over regional differences and customs in many areas. Local experience was tossed by the wayside. For example, what worked in Dazhai did not work everywhere else. For example, the effort to “get grain from the mountaintops, get grain from the lakes” often had disastrous consequences when imposed on areas where the natural conditions prevented its success. Inappropriate terracing on steep slopes and areas with thin topsoils brought deforestation, erosion, and sedimentation. Encroachments on lakes and rivers led to ecosystem imbalance, microclimate changes, and increased flooding. The filling of the wetlands in Lake Dian in Yunnan province in the 1970s is an example of uniformity gone awry. (99-98) But Dazhai was only one of many models of the Maoist era that was hastily universalized without properly looking at the scientific consequences. And Shapiro herself admits that this problem is not limited to Maoist China, but also to capitalist regimes that seek modernization:

“Just as ‘socialist’ agriculture replaced time-tested practices in the service of Maoist China’s utopian schemes, so has ‘modernization’ supplemented indigenous knowledge in many of today’s developing countries, often with concomitant environmental harm. The ideology of modernization has often disregarded local custom and practice just as the Dazhai model ignored local differences.” (201)

“The ‘red specialists’ have never managed to grasp the concept of fundamental order and balance in the relationship between humankind and nature. At every turn — from its preference for a planned economy with a focus on iron and steel production, to its promotion of grain production, population growth, and large-scale dam construction — the Chinese leadership has made decisions which run counter to the Chinese philosophic concepts of maintaining order and balance between humankind and nature. Not surprisingly, each of these decisions has caused immense damage to the country’s environment and natural resources. For political reasons, however, those scholars and intellectuals who are in touch with the philosophical tradition have had very little opportunity to speak up.” (91)

The answer to Maoist failings is not traditionalism, Confucian, Buddhist, nor Daoist. It is not returning to an unviable, pre-capitalist romanticism. One does not need Daoism or Buddhism in order to emphasize humility toward nature or reverence toward life. Traditionalism has a terrible track record. Women are often perceived as naturally inferior to men. Often, few rights exist for women, minorities, and common people. Traditionalism tends to embrace cruel social and economic hierarchies as natural and just. Traditionalism often teaches that the powerful and rich are naturally more deserving. A few have power. The vast majorty live to service them. Traditionalism is often linked to inaction in the face of injustice. Traditionalism is linked to China’s feudal past. Its ideologies consigned China to backwardness. China had become pray, to be plundered by imperialists. The answer to Maoist errors is not capitalism, which is far worse for the natural world. It is not traditionalism, which is bound up with the most reactionary forms of human social relationships. The answer to Maoist errors is more revolutionary science. The answer is Leading Light Communism.

The war footing in context

The Maoist campaigns were carried out in a hasty and militarist way. Economic activity was organized in militarist terms. Production brigades were to wage people’s war in the economic realm. Lin Biao’s slogan, “people’s war until communism” was raised. The masses were told to “Learn from the People’s Liberation Army.” The population was put on a war footing in case China was attacked by imperialists. Time mattered. This had the effect of tossing caution to the wind, treating all problems as military ones, including natural ones. This also had the effect of justifying massive and flawed economic projects, relocation of populations, and silencing of dissent. Shapiro is surely correct that mistakes were made. However, she writes as though China was not in a crisis situation. China had just recently emerged from a half century of war. The revolutionaries had defeated the feudal warlords. They had pushed the imperialist occupiers out of China’s territory, except Taiwan. They had beaten the Japanese fascist occupiers. They had mostly defeated out the Guomindang. The new, revolutionary state was surrounded by hostile forces. China had just emerged from a border war with India. The revisionist Soviet Union was militarily probing China’s borders in the North. Right next door, the West had just invaded Korea to protect its interests. And the United States was waging a genocide against the Vietnamese, the Cambodians, and Laotians to China’s south. Four million or more people would die as a result of the war against Vietnam alone. Just as the French revolution was threatened, much as the Bolshevik revolution was, the Maoists were trying to make social revolution, while defending against numerous hostile imperialists. Under such conditions, mistakes will happen.

Shapiro writes as though the Maoists committed themselves to militarism only for crackpot ideological reasons. Shapiro writes as though revolution’s survival did not hang in the balance. The reality is that the war footing was required in order to create the social unity, the ideological unity, the discipline, the organization, to fend off invasions. Also Shapiro fails to realize is that the Maoists were trying to combat deep injustices under very difficult conditions. They were trying to get the masses to take control of their own lives. The traditionalism that Shapiro seems to sympathize with is one that inflicted tremendous suffering on a quarter of the world’s population. Traditionalism means only half the life expectancy. Traditionalism means higher infant mortality. Traditionalism means poverty. It means colonization. It means slavery. It means foot binding. Furthermore, traditionalism is no guarantee that the natural world will thrive.

Shapiro is surely right that bad consequences resulted from numerous Maoist practices. However, her method is an idealist one. This is a problem of examining one aspect of the regime —  its treatment of the natural world — apart from its broader context. By contrast, a more materialist approach is to look at the Maoist failings in their proper context. Then, we must ask: How can we do better next time? One way that we do better next time is by really pushing the most advanced science to the forefront, by elevating Leading Light Communism. We deepen debates with experts. We allow more dissent. We do not hastily impose models. We do not see nature as oppositional. Rather, we elevate liberation of Mother Earth into the core principles of Leading Light Communism.