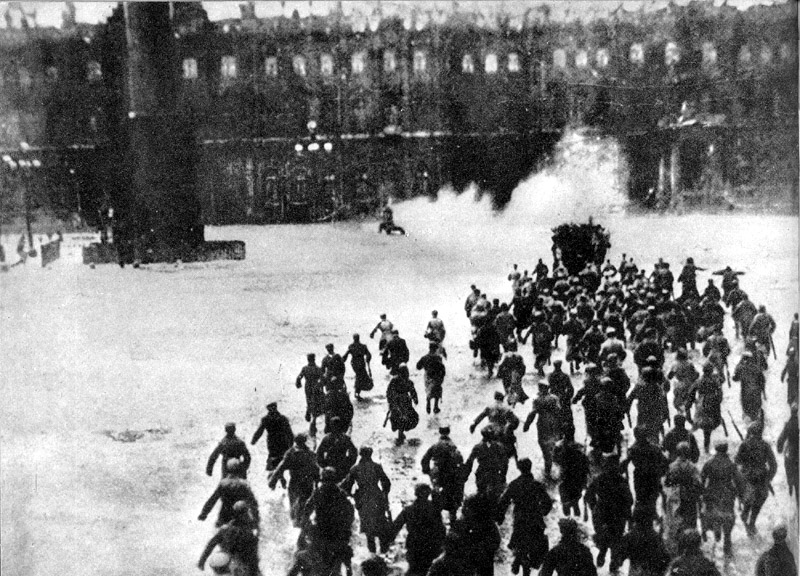 All Power to the Soviets!
– V. Lenin

The 7th of November 2017 marks the one hundred year anniversary of the 1917 socialist revolution in Russia, often referred to as the “October Revolution” because it took place on the 25th of October on the old Julian calendar. On that day in 1917, the Second All-Russian Congress of Soviets held its first meeting in Russia’s capital, Petrograd, as the Soviet workers and the Red Guards led by the Bolshevik party moved to topple the bourgeois Provisional Government led by Alexander Kerensky. The Soviets, or workers’ councils, created by workers, peasants, and soldiers in the preceding years comprised a “Dual Power” representing the interests of the working class. It was the organization of working class people into Soviets that made the socialist revolution of 1917 possible.

The Bolsheviks’ slogan “Peace, Land, and Bread” had become popular among workers, peasants, and soldiers across Russia who had suffered terribly under the Czarist autocracy and who continued to suffer under the new Provisional Government that had come to power in the 1917 February Revolution with the promise to end Russian involvement in World War I. Many people were starving as half of the country’s farmers were fighting in the war while poor families were being kicked off their land by the landowners. Workers’ strikes were a common occurrence as conditions continued to deteriorate due to the poor leadership of the Provisional Government.

In addition to the Bolshevik party, other political factions were present at the Second Congress of Soviets held on the 25th of October including the Mensheviks and Socialist Revolutionaries (SRs), but they were strongly divided in their views. While members of the other factions wanted to hold negotiations with the Provisional Government, the Bolsheviks remained united and resolute in their determination to end Russian involvement in the inter-imperialist world war that had claimed many millions of lives. After the Congress voted against the idea of negotiating with the Provisional Government, the other factions including the Mensheviks and SRs walked out.

In the evening of the 25th of October, Red Guards captured the Winter Palace in Petrograd without any bloodshed. The revolution that began in Petrograd spread to the other cities and towns of Russia as the Red Army and the Soviet workers took control of the state and its institutions. Counter‑revolutionary forces attempted to recapture Petrograd and other cities but were defeated by the forces of the workers’ revolution. In 1917, the world’s first socialist state was successfully established.

The Bolsheviks would fulfill their promise of “Peace, Land, and Bread” by implementing a revolutionary program serving the interests of the working class. In November, the Bolsheviks began peace talks to end Russian involvement in World War I, culminating in the Treaty of Brest-Litovsk which was signed in 1918. They nationalized all banks and large factories. Peasants seized land from the landowners with the support of the new revolutionary government. The Bolsheviks declared all of Russia’s foreign debts to be canceled. They planned and implemented major industrial development projects and collectivization programs that would serve the interests of the people. Under the new socialist regime, women held equal social status with men. Russia adopted the eight-hour work day on a national level. The October Revolution proved to the world that socialism is possible, that the working class can indeed achieve revolutionary victory.

As history has unfolded, we have seen socialism decline and socialist countries revert to capitalism. The 20th century great wave of socialist revolution is finished. However, the capitalist system remains the barrier to achieving a healthy, peaceful, and sustainable communist society, free of oppression and exploitation. The entire theory and practice of Leading Light Communism is about creating a new great wave of communist revolution. If humanity is to proceed forward into a brighter future, we must learn from the past and solve the problems faced by the previous 20th century socialism.

Our challenge today is to finish what the Bolsheviks started in 1917, to organize the masses of the Proletarian World into an unstoppable revolutionary force for creating New Socialism – The Dictatorship of the Proletariat in the 21st century. Capitalism can only bring more environmental destruction, poverty, war, exploitation, misery and suffering for the overwhelming majority of world’s people. It is time to build a New Socialism and create a communist world of equality, freedom, abundance, peace and happiness and friendship between all peoples on Earth.

Vladimir Lenin. “All Power to the Soviets!” https://www.marxists.org/archive/lenin/works/1917/jul/18.htm

“All-Russian Congress of the Soviet.” https://www.marxists.org/glossary/events/a/arcs.htm

Vladimir Lenin. “To the Citizens of Russia!” https://www.marxists.org/archive/lenin/works/1917/oct/25.htm