Bangladesh is in chains, literally 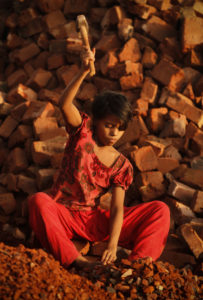 In his Communist Manifesto, Karl Marx wrote that the proletariat had nothing to lose but their chains. Marx was speaking figuratively. By the time Marx wrote, Europe had mostly abolished slavery, at least officially. Marx was speaking to the wage slavery of the free laborer, who nonetheless suffered intense poverty in the Europe of the past just as free laborers suffer today in the Third World. In our land, our people suffer not just from “wage slavery” of the free laborer, but also slavery in its most vicious and barbaric form still exists even though it is now the twenty-first century. And it is only getting worse with the globalization of capitalism. Slavery, human trafficking, in Bangladesh is now tightly bound to the global market.

In 2012, it was estimated that between 330,000 and 360,000 of our brothers and sisters are enslaved. Bangladesh was tenth on a list that ranked the countries in which slavery was practiced.  Slavery has historically been concentrated in the countryside, where semi-feudal conditions and traditions are strongest. Much of the land and power in the countryside is held by landlords. The masses are so poor that we live on a razor’s edge. Many of our families live under constant threat that we will lose everything. Many of our families have already lost everything. We are driven off the land. We are hungry. We are sick. We fall into debt that we can never escape from. Ourselves and our children become slaves to the local landlords, userers, capitalists, and criminal organizations. Many flee to the city for a better life only to be met with dissappointment. There the feudal barbarism mingles and mixes with the cruety of liberal capitalism. The innocent suffer the most. Our children are turned into beasts of burden by the overlords of the country and city. Or women and daughters are stolen and placed into bondage by sex traffickers. Their bodies are sometimes exported to be consumed on the global market. The bodies of our people are just another commodity to the empire:

“She comes into the room swaddled in a red sari, carrying big premature black bags under her eyes. She tells her story in a slow, halting mumble. Sufia grew up in a village near Khulna in the south-west of Bangladesh. Her parents were farmers; she was one of eight children. ‘My parents couldn’t afford to look after me,’ she says. ‘We didn’t have enough money for food.’  And so came the lie. When Sufia was 14, a female neighbor came to her parents and said she could find her a good job in Calcutta as a housemaid. She would live well; she would learn English; she would have a well-fed future. ‘I was so excited,’ Sufia says.  ‘But as soon as we arrived in Calcutta I knew something was wrong,’ she says. ‘I didn’t know what a brothel was, but I could see the house she took me to was a bad house, where the women wore small clothes and lots of bad men were coming in and out.’ The neighbour was handed 50,000 takka – around £500 – for Sufia, and then she told her to do what she was told and disappeared.”

“‘Jesse used to tell me that she had bought me as a slave at Tk 40,000 from Monira and Joyati, and therefore, I have to work for free,’ Bedena said.   The couple used to torture her by spraying hot water on her body, stabbing her with hot kitchen knives, and beating her up with sticks and rolling pins, alleged Bedena.   Jesse as usual tortured her Tuesday morning on the pretext that Bedena could not prepare breakfast in time, leaving her unconscious.    She discovered herself in the bathroom after regaining her consciousness.”

“In the face of acute poverty, his father, a farmer, sent him at this early age to the capital to work as a domestic help, said Mohammad Sadek Ali, a cousin of the boy. Another cousin Yasmin brought him along from Kishoreganj to Dhaka city around two and a half months ago and arranged a job for him at a house in Mohammadpur near the mosque.

‘The people at the house where I worked fed me once a day. I was given some rice in the morning and that was it,’…

Masum’s body was scarred all over. Deep purple welts were seen on his back that is already crisscrossed by old scars.  He said he had been hit on the head with a rod and that the scars were from the injuries when the homemaker had flogged him with a bundle of wires.  A black blister was seen on his left elbow. ‘She burnt me here with a hot iron spoon,’ Masum said.  His cousin sister rescued him on Friday as she discovered him in this appalling state.

The child said he had to sleep inside the bathroom. ‘The floor used to be wet.’  He used to do the laundry, drag mattresses up to the rooftop to put them out in the sun and sweep and mop the floor.”

“The exploitative practices centring Bangladeshi workers in Malaysia constitute nothing other than human trafficking; the governments of Bangladesh and Malaysia have not been able to protect the workers’ rights, said Irene Fernandez, a veteran migrants’ rights activist of Malaysia.

When they brought workers in surplus numbers to Malaysia, they were only interested in making fast cash. The outsourcing companies told Bangladeshi job brokers ‘you pay me 500 ringgit per worker and find jobs for them and do whatever’. So, Bangladeshi job brokers then bought the workers from the outsourcing companies, and literally made them slaves. The brokers then told the workers ‘you go and work, I will give you food and lodging’. And the workers were put to work for two, three, or four months.”

The First World is happy with slavery of our people. They do not have to feel or see our pain. They are pleased with the cheap goods that fill their homes. The global corporations say that it is good for business to keep the population controlled. Our sweat and tears fuels the prosperity of their empire. The corrupt politicians do not care about our pain. Their ears do not hear our cries, but only the orders of their imperial masters who pay them well to keep us in chains. The Islamists do not care about the poor, they declare slavery is acceptable in their twisted minds. They would have us be slaves to their barbaric caliph who feeds on the blood of the people. The feudalists and local capitalists do not care, they are the ones who hold the whip for the empire. The liberal NGOs use our pain to extend capitalist control over our lives.

We have nothing to lose but our chains. We say “no.” No to slavery, poverty, hunger, violence, disease, ignorance, cruelty. We are the ones who create the wealth. We are the ones who work. We are the ones who grow the food. We are the vast majority. They need us. We do not need them. We can have the power if we have the courage. We say “yes.” Yes to liberty, land, homes, prosperity, health, jobs, education, dignity. Today we planting seeds in ourselves, in our families, in our communities. Total liberation, total revolution, for our children and their children. We will harvest a revolution, a better world. The future is our’s. One fight. One land. One people. One organization. One leadership. One truth. One Leading Light.